AM I DEAD? The Untrue Narrative of Anatomical Lewis, The Slave

Anyone who regularly reads Show Showdown knows that I am a huge fan of the Flux Theatre Ensemble. The Lesser Seductions of History, Dog Act, Hearts Like Fists, Jane the Plain, and Sans Merci were all tremendous and beautiful productions, full of love and talent and insight and compassion. They are among my favorite shows of the past 20 years. 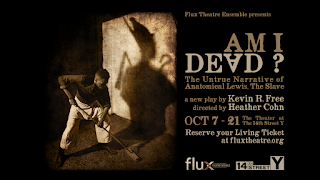 But everyone has a bad day at work now and then, and unfortunately, AM I DEAD? The Untrue Narrative of Anatomical Lewis, The Slave is Flux's.

AM I DEAD? takes place in a purgatory where people who have broken black men psychologically are sentenced to put them back together, literally, even if it takes forever. The purgatorians exist in a workroom full of rocks and tiny pieces of what look like wood or fiber and turn out to be the minute remains of the black men who have been broken. (The set, by Will Lowry, is wonderful, full of mystery and just the right amount of creepiness.) The people in purgatory--Mrs. John Gray, Isaac, and Tatiana--have to find the appropriate bits and pieces and re-form them into the men they have wronged. It is an impossible task. Mrs. John Gray has been at it since the mid-19th century and Isaac since 1991. Tatiana joins them early in the play.

The purgatorians' work is interspersed with scenes from their lives with the black men they have wronged. (They are all played by the truly amazing Corey Allen, who makes each one distinct and specific and switches from one to the other almost imperceptibly).

As AM I DEAD? unfolds, it becomes clear that this is a morality play about the mistreatment of black men in the US. Commentary on Rachel Dolezal (the infamous white woman who decided she was black), born-again Christians, and even the Egyptian Gods Isis, Osiris, and Horus is stirred in.

The ideas in AM I DEAD? are interesting, and there's no arguing with the politics. The mistreatment of black men is a national horror of which we all must be ashamed and against which we all must fight. But a play must work on its own terms, and unfortunately, AM I DEAD? is preachy, repetitive, and heavy-handed. It outlines its messages in bold and italic again and again, and good theatrical moments (the projections; the way the people hold their stomachs after seeing scenes from their lives) go from being hard-hitting and impressive to boring and even annoying.

Perhaps the biggest flaw in AM I DEAD? is that it lacks the compassion that I consider to be the hallmark of Flux Productions. It may sound strange to expect compassion for people in purgatory, but it's a theatrical necessity for the play to work. Presented without compassion, the main characters become flat. Anything valuable they have done in their lives is dismissed; they are judged only by their faults. In real life, I have zero compassion for the cops who shoot innocent black men, but if they were in a play, I'd want them to be fully dimensional characters. (In contrast, the black men are a little too good, which flattens them as well.)

If you want the audience to accept your message, you have to give us a way in. As it is, AM I DEAD? works against our identifying with the purgatorians, and allows us a simple out: we're not that bad. And when the show ends with the actors facing the audience and accusing us, it's offensive rather than powerful. Considering that the Flux audience is likely quite aware of the great shame of racism in our country, and also that many of us are anti-racism activists, and furthermore that some of us are black men ourselves, you have a case of not only preaching to the choir, but attacking the choir.

I am nevertheless excited to see the next Flux production, and the one after that.