This is not a review. I saw the first preview of Love, Love, Love, and a review wouldn't be appropriate. However, the show is already in excellent shape, and quite interesting, and completely worth writing about. Take my random natterings with a extra-large grain of salt, and beware: there will be spoilers. 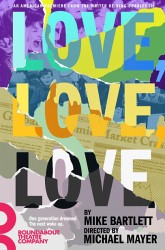 Love, Love, Love is by Mike Bartlett, whose King Charles III was downright thrilling. It follows a couple of remarkably self-centered people from their meet-not-so-cute in the 1960s  (Act I) through their marriage and life with teenaged children (Act II) to their retirement years (Act III). If drama is about people learning or growing or changing, this is not a drama, although parts are quite moving. If comedy is about laughing at people who neither learn nor grow nor change, it's definitely a comedy. And parts are quite funny.

In Act I, we meet our protagonists Kenneth and Sandra. They see themselves as free spirits, which allows them to get together while she is on a date with his brother Henry. They believe that "we're going to die" is justification for doing whatever they want whenever they want.

By Act II, they have somehow ended up in the suburbs, well-off, with demanding jobs. But they still fancy themselves free spirits, which includes some breathtakingly bad parenting. This section is simultaneously really ugly and really funny.

In the third act, their now-37-year-old daughter Rose accuses them of being hypocrites, of being responsible for Thatcher, of buying rather than changing the world, and of ending up full of themselves rather than full of the love, love, love extolled by the Beatles. I think Bartlett may mean this as an indictment of Baby Boomers, and it does have some truth; however, if he means Ken and Sandra to represent the entire generation, he's way off-base and completely unfair. The Baby Boomers (of whom I am one) have a lot to answer for, but Ken and Sandra are pathological narcissists who destroy everything in their path.

Bartlett so wants Rose to be his mouthpiece that he loses track of her as a character. If he had given her one redeeming feature, that would have helped. If he had given her a speech focusing on her parents' personal shortcomings, that would have helped. Had she said, "You two never paid any attention to me, you were terrible parents, you never listened, you were completely unsupportive," she would have been telling the truth, and it would have been satisfying for the audience. Instead, she does her political spiel, which is weird. Is Bartlett trying to give the play some weight? It doesn't work.

Rose then focuses on Ken and Sandra's having been too supportive of her violin playing even though she was second rate; she now regrets her musical career and she blames it on them. But they don't give her enough attention to affect her choice of breakfast, let alone her career path. And when Ken says that she wasn't supposed to listen to them, that she was supposed to rebel, he makes more sense than she does. The klutziness of her attack lets her parents off the hook, which isn't fair.

The (deliberate?) irony of Love, Love, Love is that pathological narcissists can be so much more entertaining than their legitimately aggrieved victims. Ken and Sandra are awful, awful people. They pretty much destroy their children. But you'd rather spend time with them than poor sulky Rose.

I have strongly mixed feelings about Love, Love, Love. I admire its energy, humor, momentum, and depiction of character, but I don't think I actually liked it much. Yet I'm glad I saw it.

The play is enhanced by strong direction by Michael Mayer and an excellent cast. Amy Ryan is deliciously despicable as Sandra; it's the most interesting part and the most demanding. She has to age from 19 to her early 60s (I think), and she has as much dialogue as the rest of the cast combined. She gives a tour de force performance without ever detracting from the ensemble. Even when you most want to slap her, you kinda like her. Impressive! Richard Armitage is charming as Ken and manages to seem somewhat less selfish than Sandra, even though he is completely, horribly her equal. Alex Hurt is subtle and stolid as poor Henry, powerless against his brother's cheerful manipulations. Ben Rosenfield  is heartbreaking as Ken and Sandra's son Jamie. And Zoe Kazan is excellent as poor Rose; I doubt it's easy to spend an entire show whimpering, but she does it quite effectively.

Wendy Caster
(5th row orchestra on the side; tdf ticket)
Posted by Wendy Caster at 1:10 PM

A really interesting (non) review. I didn't pick that up about Rosie so much on the page,but can see how that would perhaps be more evident in the stage characterisation. Yes, the parents are dreadful,selfish, manipulative creatures......but they have some cracking dialogue! I'm so looking forward to seeing it.