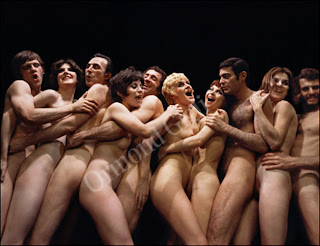 See the picture above, of the happy, naked people embracing one another as they stand in a line? It was taken by Ormond Gigli in 1969, at the final--um--dress rehearsal of Oh! Calcutta! It's a stunning photograph, and I am thrilled that it was chosen for use on the cover of my forthcoming book, which is due out in late October or early November, and which can be pre-ordered here <Hard Times>, or here <Hard Times>.  Because there was some concern that a book with nudity on the cover could offend potential buyers, the picture has been--I think--most excellently altered. As the cover of my book, the photograph looks like this: 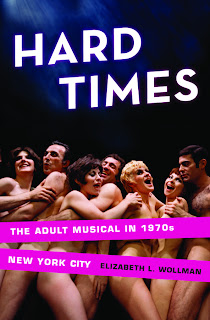 I don't mind the relative dearth of breasts or pubic hair on the cover--there are plenty of pictures of nudies within. First of all, books like these are hardly likely to top the New York Times bestseller list--or any bestseller list--so I'm happy to court all the potential buyers I can get. And second of all, the PG version of the book helps assuage one of the many anxieties I have about it just prior to its release: that people will be interested in it only because they think it will be titillating, in the way that pornography is titillating. These people will inevitably be disappointed because in the end, Hard Times is less a book about "porn-musicals" (which is the way some of my friends and acquaintances have described my book project in the past few years) than it is a scholarly treatment of the ways that the sexual revolution influenced musical theater in 1970s New York. This is no dense, overly-written tome, mind you. I think that for an academic, I am a pretty straightforward writer. Nonetheless, no matter how you slice it, Hard Times just ain't porn.

Of course, potential disappointment among the men-in-raincoats set is hardly the most acute anxiety I am experiencing. Other, bigger concerns include: Will anyone even buy the thing, let alone bother to read it? Will anyone review it? Will the reviews be really, really mean? Or will everyone just ignore it?

I hope that Hard Times is not ignored, if only because so many of the musicals discussed in it have been ignored for so long, and I don't think they deserve to be. In fact, I've sort of fallen in love with some of them and, in the process, with some of the people who wrote them. And I hope that readers will fall in love with--or lust, or, at the very least, vague, flickering attraction to--them, too.

The show that sparked my interest in "adult musicals" was not Oh! Calcutta!--although I do admit to having had a real fascination with that long-running show, which advertised heavily in Times Square during its impossibly long run through the 1970s and 80s, and which my parents would never let my sister and me see when, as a young family, we waited on line at the TKTS booth debating what shows we'd try to get cheap tickets for. Rather, the show that led to this book was a revue called Let My People Come, which was a huge hit in New York and across the world in the mid-1970s, but which I'd never heard of when, almost a decade ago, the friend of a friend learned about my first book, on rock musicals, and responded by sending me a cassette tape simply marked "Bad Musicals." Side one had selections from "Nefertiti," a 1976 musical that was scheduled for Broadway but that fared so poorly in its out-of-town run in Chicago that producers thought better of bringing it to New York. They were smart: I couldn't get through that side of the tape.

The second side, though, had selections from a show called Let My People Come, which ran for several years during the mid-1970s at the Village Gate in New York, as well as on tour and in various other cities all over the world. Songs on the tape included "Give It to Me," "The Cunnilingus Champion of Company C," the titular number (have you noticed that I keep using words with "tit" in them? Hope so!), and the incredibly explicit "Come in My Mouth." This was on stage? At the Village GATE? I was astounded. I was fascinated. I had to find out more.

So I did. In the process, I interviewed a whole lot of people who were involved in writing and producing and performing these shows: The journalist Jonathan Ward, whose article "Come in My Mouth: The Story of the Adult Musicals of the '70s" was the first thing I read when I started my research (it's still online and you can read it here.). Many lovely, gracious actors, who answered my questions with enthusiasm and good humor, and more than one of whom joked that they'd be a lot more comfortable talking about their adult musical past were they to take off all their clothes (none did). Earl Wilson, Jr, who wrote and composed Let My People Come, and who is a doll. The co-authors of one of the first gay musical revues, Lovers, who joked and laughed and finished each others' sentences as they reminisced about writing their show for the landmark gay theater company, TOSOS (The Other Side of Silence). The son of a high-ranking member of the Genovese family who eschewed getting made because he wanted to be an escape artist and produce a burlesque show called We'd Rather Switch. And the late David Newburge, composer and author of the musical Stag Movie, who had me over to his West Village apartment, showed me his many, many, many birds, let me interview him, and then broke out some porn that he'd written the scripts for, was particularly proud of, and wanted me to see.

Anyway, the book was a lot of fun; one last anxiety I have been having is that I'll never land on such a fascinating, quirky little topic again. I hope among hope that I do. In a strange way, I'll really miss Hard Times when it's released--I guess in the same way a parent misses their kid when they go off to college or out into the world. But out into the world it must go. When it gets there, I hope people get as much enjoyment from reading it as I got from researching and writing it. The shows and the people I write about deserve that much.

Posted by lizwollman at 4:35 PM