I See London I See France 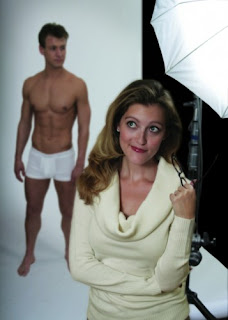 There's a fun and fun-lovin' couple putting some groove in the subplot of this new (NYMF) musical: both he and she are "knowing when to leave" types, not looking for anything more than quick hot hook-up sex. Their first duet spells it out: it's not meant to last more than "Two Weeks Max". It doesn't matter that it's easy to predict that they get stuck on each other: their material is breezy and clever and both performers (David Rossmer and Ronica Reddick) are game and amusing. But ironically (considering the characters' personalities) they overstay their welcome, as does the slight, rambling show. The main story - which concerns a recently-dumped uptight "smart girl" ad exec whose hormones go bonkers over a ripped but dimwitted underwear model - doesn't deliver on its seeming promise to send-up our sex-soaked culture, and it curiously forgets to give us a reason to care about our heroine. (We're set up for her lust to morph her into one of the lingerie-clad bimbos who follow her around like a hallucinated Greek chorus, but instead she goes from prudish to obnoxious and entitled: why should we care?) There are some very enjoyable, attractively catchy songs in the score (the title song is especially hard to get out of your head) and I liked the performers: Jordan Gelber (as an ad boss) ably and energetically carries a lot more of the show than a plot synopsis would lead you to expect, and Nicholas Ardell (who spends almost all of the show in nothing but boxer-briefs) manages a good deal of sweetness as the skin-deep underwear model. Is it wrong to be disappointed that the show isn't any deeper than his character?
Posted by Patrick Lee at 7:30 PM

Really? I kinda thought it was great. And the night I went, the audience went crazy. Were you the guy in the corner with your arms folded? ;)