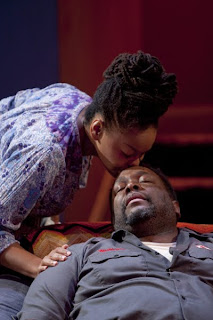 The story behind Broke-Ology makes it the kind of play you want to love, or even enjoy: a young playwright (Nathan Louis Jackson) lands in New York without a dollar to his name, and within a year goes from homeless and sleeping on the subway to a position as a commissioned writer for one of the foremost non-profits in the country (Lincoln Center Theater). Unfortunately, the play itself holds no more drama than your average freshman television series; it's often so predictable that I could guess not only the situations in which the characters would find themselves, but even the words they would use to describe them. The production (somewhat lazily directly by Thomas Kail) does have one thing going for it: a strong central performance by Wendell Pierce, as a proud patriarch whose life and community are crumbling before him. Pierce--along with Francois Battiste and Alano Miller as his adult sons, and Crystal A. Dickinson as his beloved wife--works hard to infuse the play with a level of tension that simply isn't there in the writing. Hopefully Jackson's next work for Lincoln Center, set to premiere next year, will give his actors more to work with.
Posted by Cameron Kelsall at 9:27 AM