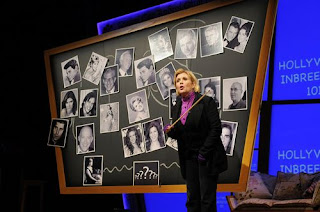 A word to the wise: don't eat before you see Wishful Drinking, the acerbic and utterly enjoyable one-woman show written and performed by Carrie Fisher, which opens tonight at Studio 54. No, there's nothing disgusting onstage--unless the sight of a slightly zaftig fifty-three year old woman trying to dry hump a young male audience member doesn't exactly do it for you. Rather, the reason that you should refrain from food prior to Fisher's two-hour confessional is that, if your reaction to the show is anything like mine, you'll be heaving so heartily in your seat that by the end of the evening you find yourself on the verge of nausea. Fisher--back on Broadway for the first time in nearly three decades--holds the audience in the palm of her hand for the show's entirety, skillfully wringing waves of comedy from some of the most unfunny moments of her life: the dissolution of her parents' marriage; her fraught relationship with ex-husband Paul Simon; having the father of her daughter leave her for another man, and then promptly announce that she'd "turned him gay by taking codeine"; and, above all, her almost lifelong battle with substance abuse. All of this material is inherently dramatic--most of these plot-points could easily make their way into a play by Martin McDonagh or Tracy Letts--which is all the more reason to praise Fisher and her comedic prowess. She throws up her hands and laughs at her pain, and you'd better believe we're laughing with her.
Posted by Cameron Kelsall at 12:51 PM