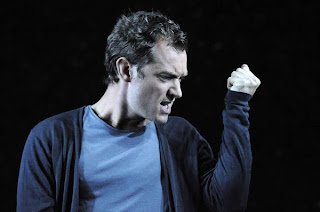 Jude Law throws his whole body into his riveting, magnetic performance as Hamlet: the force of his physicality is dramatically intense, and matched to the ferocity with which he navigates the text. Despite this and the reliably top-notch production values by way of Donmar Warehouse (special nod to the gorgeous lighting design), the production is a long, dull slog. When this many fine supporting actors fail to register I tend to think the responsibility belongs at the director's door, but I can't say for sure why Peter Eyre plays the ghost of Hamlet's father like Eeyore on a blustery day, or why Geraldine James barely sounds any notes of maternal concern as Hamlet's mother, or why Gugu Mbatha-Raw fails to generate any sympathy whatsoever for Ophelia. Hamlet as played by a big-name movie star of ability could have made for a sensational event to turn new audiences on to classic theatre, but this is one of the least lucid productions of the play I've ever seen. If you don't already know the play you're likely to be at a loss about most of the essential relationships, and you won't get any help from the direction about what information is going to pay off later in the plot.
Posted by Patrick Lee at 6:02 AM