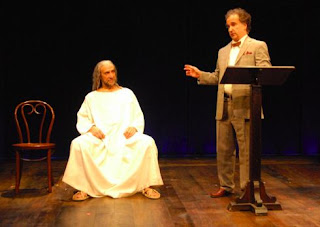 One of the toughest tickets in town right now is this trio of short one-act mindfucks by Ethan Coen. The middle one is a dud, save for a fun visual joke near the top, but the opener - about a guy whose afterlife in Purgatory gets screwed up seemingly by red tape and human error - is terrific. It plays like a black comedy version of an old Twilight Zone episode. Even better is the show's final one-act, which kicks off with God (played with gusto by F. Murray Abraham) berating the audience: "They're called the Ten Commandments you assholes not the Ten Suggestions!". Coen has written these plays so that each scene peels back a layer to reveal what's really going on - in other words, the less you know going in the better because the fun is in Coen's gradual reveal. While ultimately slight, the show is thorny, playful fun and, except that the scene changes are too long and threaten to break the momentum, the production is smart and precise. The show's entire run sold out in advance of performnces, but it's worth braving the stand-by line.
Posted by Patrick Lee at 11:45 PM