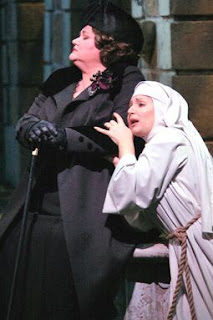 Jack O'Brien, one of theatre's most versatile directors, was an inspired choice to helm the Met Opera's new production of Il Trittico, Puccini's disparate trio of one-act operas. Each of the three requires a different skillset - the first is a lurid melodrama of sexual jealousy, the next is a somber spirituality-based tale of a cloistered nun, the third is a farcical comedy in which a disinherited family fights at their relative's deathbed - and O'Brien delivers each with exceptional clarity and theatrical know-how. Except for re-setting all three in the 1950's, he doesn't do anything high-concept to unduly unify them: he simply realizes each opera fully, distinctly. Il Tabarro burns at a temperature that is just right for passionate, fevered melodrama. Gianni Schicchi is appropriately colorful and comic, with a sometimes dizzying amount of stage action and business. However, the production's crowning achievement is the nun's story Suor Angelica, which O'Brien builds slowly and carefully to a visually stunning, transcendent climax. Operagoers are hereby warned: this is going to be one of the toughest tickets of the season.
Posted by Patrick Lee at 10:00 AM

damn, i had tickets to another show on fri night...and looked like there were some tickets left. the other performances are pretty much sold out. humph. i think i missed my chance to see trittico.

There are always the standing room tickets available day of -- and they're selling them online too starting at 10 a.m.