So much depends on where you begin a play. Do you start when character A is behaving well? Or when character B is? Do you start at the foundation of their relationship or in media res? In Yours Faithfully, written in 1933 but currently getting its world premiere at the invaluable Mint Theater Company, playwright Miles Malleson starts a little too in media res for my taste.

Anne and Stephen have been together for eight years. Many of their friends consider them an amazing couple. In fact, their compatibility has been rated at 80%, when most couples are rated at 20%. But there is trouble in the 80% paradise, or at least a sense of unease. Stephen has lost his joie de vivre and succumbed to writer's block. Anne is happily busy with the school she runs and their children (never seen), and she suspects that Stephen needs a new muse/lover. She chooses their friend Diana, who is just coming out of mourning her husband. Stephen and Diana eagerly accept Anne's generosity, and soon Stephen is happy and writing again--and perhaps more in love with Anne than ever, due to his new freedom. Just one problem: no matter how much Anne tells herself that jealousy is beneath her, she cannot help what she feels: terribly, terribly, terribly jealous.

READ MORE>>
Posted by Wendy Caster at 6:41 PM No comments:

Due to some health issues, it has been two and a half months since I've seen a play--what a gift that the first one back was August Wilson's superb Jitney, beautifully directed by Ruben Santiago-Hudson. 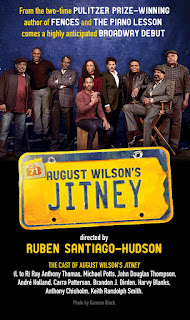 The story is simple, and painfully timely, even though it takes place in 1977: developers are taking over the neighborhood and ruining people's lives along the way. In Jitney, the location is a storefront car service in Pittsburgh. The people are, mostly, the cab drivers, each with his own story, needs, faults, and foibles. While simple descriptions of the characters (the drunk, the numbers runner, the young mother disappointed in her man) might sound like cliches or types, in Wilson's hands they are fully dimensional and heartbreakingly real. They are also great company.

READ MORE>>
Posted by Wendy Caster at 4:30 PM No comments: 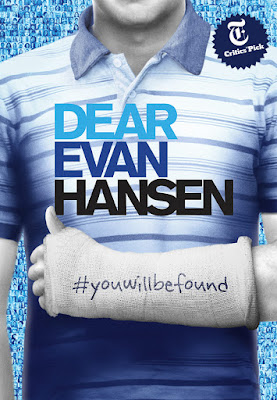 Dear Evan Hansen is an intimate, well-crafted, well-performed musical, the kind that tidily trashes the generalized dismissal of musical theater as an emotionally overwrought genre filled with forced cheeriness and an abundance of glitz. Performed by a small cast on a sleek, deceptively simple set of sliding panels designed to look like the glossy, liquid screens of laptops, tablets and cellphones, Dear Evan Hansen is, on one level, about the way teenagers relate to their peers and to adults (or don't) in the technological age. But it goes deeper to examine contemporary cultural phenomena, like technology's role in what is sometimes referred to as "inspiration porn" and the ways that the very existence of the Internet can magnify the sorts of awkward, unpleasant social shit adolescents struggle with and always have, even when it couldn't be magnified and instantly replicated across the world with the click of a button.

The musical is moving, layered, and very impressively performed. There's been a lot of buzz, which began when the show premiered off-Broadway at Second Stage last spring, about just how brilliant Ben Platt is in the title role, and it's entirely warranted. Only a handful of years older than Evan, a high-school senior, is supposed to be, Platt clearly remembers well the emotional roller-coaster of adolescence. His Evan is all coiled anxiety, crippling self-consciousness and monstrous self-doubt, and the character is as frustrating and as heartbreaking as your average teen can be. Evan's single mom, an equally memorable Rachel Bay Jones, works long hours, takes classes at night, and thus tends to worry about and dote on her son from a harried distance. It's a testament to the writing and the performances that their relationship, ultimately the heart of the musical, never feels hollow or strained.

Neither, really, does the slightly tidy ending, which is a little cleaner than it surely would have been had the proceedings depicted in Dear Evan Hansen taken place in real life instead of over the course of a two-hour musical. Still, and while it never tortures its characters, Dear Evan Hansen makes it clear that none of them make it through a tough, morally questionable stretch without consequences: some close relationships are ruined; others grow much stronger. Still, the show implies, everyone involved will move on, heal, eventually be all right. This is not a bad message to impart; I took it as a gift.

And for the record, my daughter, the friends I saw the show with, and I can't wait for the cast recording to be released later this winter.