Lady in the Dark

What an odd show is Lady in the Dark. Consisting largely of three dream sequences, it lacks forward propulsion and is frequently overdone and/or pointless and/or flabby, particularly in the first act. But it has some gorgeous songs, and the recent MasterVoices version had Victoria Clark in the lead role. She of course nailed the second act's two wonderful numbers, the energetic and funny "Saga of Jennie" and the wistful and lovely "My Ship."


The plot, such as it is, is simple: Liza Elliott (Clark), editor of the fashion magazine Allure, is slowly unraveling and doesn't understand why. Her main symptom is her inability to decide between using "the Easter cover" or "the circus cover"; she has lost her certainty at work and in the world. Elliott lives with a married man and is glad of the limitations of the arrangement. She also goes on a few dates with a movie star. And then there is the advertising manager of the magazine, with whom she spars regularly and who seems to get who she really is. But she feels detached and at sea, so she goes into therapy, and her problems are solved in three sessions (if only!) via the dream sequences.

Ted Sperling who directed this Lady in the Dark and who runs MasterVoices, has spoken of wanting to do this show with Clark since they were teenagers. I'm glad for them that their dreams came true. However, the MasterVoices chorus was not well-served, particularly in the large and awkward City Center, where their 100-plus voices were lost amid the murky acoustics. (In contrast, in their most recent show, Night Songs and Love Waltzes, they could be heard loud and clear and were downright thrilling. But that was in Alice Tully Hall, whose acoustics are about a million percent better than City Center's.)

Sperling made at least a couple of other tactical blunders. One was having Clark sing "My Ship" sitting on the floor the stage. He has probably never sat in the balcony of City Center, but I have, so I know how mediocre the sight lines are up there. Even in theatres with good sight lines, many audience members will have trouble seeing someone sitting on the floor! It's a particularly questionable decision considering the importance of the song to the show. Another bad choice was having/allowing David Pittu to play a gay character in a wince-worthily fey performance that would have been cliché/offensive decades ago, let alone in 2019. (On All That Chat, sergius called his performance "gay minstrelsy," which sums it up perfectly.)

I enjoyed "Lady in the Dark" only intermittently. I'm not a huge fan of Ira Gershwin; I hated the choreography; I didn't like the costumes; and I thought the dream sequences were way too long. But many other people loved it, and I suspect this is a classic case of "to each her own."

I look forward to the next time I can actually hear the MasterVoices singers.

As you probably already know, in the old days theatre critics wrote their reviews right after seeing the performances. In fact, as the shows ended, the critics ran up the aisles to maximize their writing time before deadline. 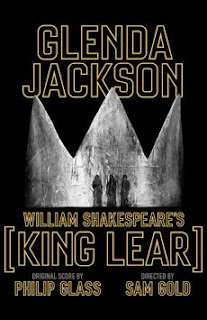 If it were still the old days, and if I had written my review of King Lear right after seeing it, I would have given it an excellent review. I was caught up in the glow of a Saturday night performance in good seats watching a play I love starring many actors I deeply admire.

But time has passed, and the glow is gone. I have had time to realize that, yeah, the sound and fury did signify nothing. Glenda Jackson was great fun, but, really, Lear shouldn't be great fun. I respected and enjoyed her performance, but she didn't touch me. I thought that Ruth Wilson was quite good, while Elizabeth Marvel was not at her best (far from her best, really). The third sister, Aisling O'Sullivan, shrieked her way through the show; she was terrible, but I appreciated her commitment. (And, yeah, the three sisters all had different accents; consistency was not a characteristic of this production.) Jayne Houdyshell and John Douglas Thompson were excellent, as Jayne Houdyshell and John Douglas Thompson always are.

This is not the first time I've seen such a distinguished cast end up in such a jambalaya of a classic. In fact, the criticism "they all seemed like they were in different shows" has become common in recent years, particularly when the cast is star-studded.

Way back when, in the days of affordable Broadway, before directors decided that their ideas are more important than the playwrights', classics weren't events. Instead, they were solid productions, true to the writing, with cast members all in the same time period and speaking the same language. Many of these productions lacked big stars, but they were excellent. I miss them.

The Pain of My Belligerence

My sister once said that, while the worst men are incredibly sleazy, the worst women are incredibly stupid. In the world premiere of The Pain of My Belligerence at Playwrights Horizons, writer Halley Feiffer spends 80 interminable, tedious, painful minutes demonstrating this point.

The plot is simple: Cat, a needy woman, falls for an obnoxious, self-involved, asshole of a man named Guy who bites her, doesn't let her talk, and, oh, yeah, is married. They stay together for years. Time is marked--and faux significance is ham-handedly shoved into the show--by various elections, of course including that of Donald Trump. In her note in the program, Feiffer writes,


This play aims to explore the corrosive effects of the patriarchy on women and men alike—to examine the culture that has created the phenomenon of toxic masculinity and its insidious effects, and to start imagining ways we can break free...

Blah, blah, blah. Even the patriarchy deserves fairer representation than this boring, unpleasant play and the morons it depicts. Also, millions of humans have grown up in patriarchies but many still think for themselves, challenge themselves to grow, and take responsibility for their own behavior.

In the third scene of The Pain of My Belligerence, Cat meets Guy's wife Yuki. She is a complicated, original character, and this scene is almost kinda sorta not terrible.

Playwright Feiffer plays Cat; her acting is moderately better than her writing, but she lacks the sort of texture and subtlety that could make Cat bearable and/or sympathetic. Guy is played by Hamish Linklater, who is almost handsome enough to justify Cat's complete and voluntary subjugation to him. Yuki is beautifully played by Vanessa Kai, who brings way more class to the show than it deserves.

I have rarely hated a play as actively and deeply as I hated this one. The minutes nanometered along, and my desire to leave the theatre grew almost unbearable by the ninth hour of its ostensible 80 minutes. When it finally ended, I commented to my friend, "Of all the plays I've ever seen, this show would make the top 10 of shows I hated the most." She replied, "Top 5."

'Cause here's the thing:
To know how it ends
And still begin to sing it again
As if it might turn out this time
I learned that from a friend of mine

See, Orpheus was a poor boy
But he had a gift to give:
He could make you see how the world could be
In spite of the way that it is

One of the many miracles of Hadestown, Anaïs Mitchell and Rachel Chavkin's strange, stunning folk opera at the Kerr, is the richly bittersweet way it manages to simultaneously lament and celebrate the endless repetitions that make up human lives. In so many ways, most all of them beautiful in execution, this haunting show teases out the endless redundancies and rituals that lead us from birth to death, pointing out along that way that cycles can be a drag, but also the source of joy and celebration. Life might seem futile in its repetitions, Hadestown implies, but so long as there's the potential for beauty, love and ritual, it isn't a waste.

READ MORE>>
Posted by Liz Wollman at 9:58 PM No comments:

Bathsheba's Psalms Or, a Woman of Unusual Beauty Taking a Bath

Posted by Sandra Mardenfeld at 4:45 PM No comments:

The Cradle Will Rock

Marc Blitzstein's 1937 "play in music," The Cradle Will Rock, uses theatre as a political soapbox. Its scathing depictions of the hypocrisies of capitalism, religion, and other societal icons remain painfully apt today, and there is no doubt that it is an important work. It is also dull.

John Doyle's direction uses cutesy devices to try to liven up the evening, but he can't fight the reality that 90 minutes of in-your-face lecturing set to nonmelodious music is a slog.

It doesn't help that Ann Hould-Ward's costumes, with all of the performers wearing blue and gray work clothes, add a layer of monotony to the proceedings and remove the physical cues that help to distinguish not only character from character but also class from class.

But a lecture is a lecture, and the evening simply doesn't work for me. (However, the show received an enthusiastic standing ovation the night I saw it.)