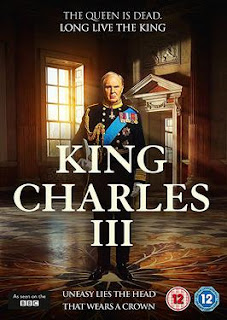 I didn't rush to see the movie version, which came out in 2017, because I didn't want to mess with my memories of the play, which was so damn good. But, more recently, I decided to watch it because

(2) The screenplay is by the playwright, Mike Bartlett; the movie is directed by Rupert Goold, who also directed the play; and most of the original Broadway performers are in the movie; and

(3) For some strange reason, King Charles III has been on my mind recently.

The movie is remarkable, every bit as good as the play, so much so that I'm linking to my original review, here. I would only add that Bartlett was so insightful as to be prescient. (If you watch the movie, and you should, keep in mind that the play first appeared in 2014.) I'll be fascinated to see how much life imitates art going forward.

Posted by Wendy Caster at 10:00 PM No comments:

I remember learning in my teens that George Gershwin was only 38 when he died. I felt so sorry for him, but also for me. What music died with him? Gershwin had mentioned to a friend that he had a string quartet in his head, but hadn't had time to write it down. Heart-breaking!

Author Laura Frankos shares my sense of loss, as does the lead character of her entertaining novel, Broadway Revival. It is 2070, and David Greenbaum, in mourning for his late husband, starts obsessing about Gershwin. In David's world, the brain tumor that killed Gershwin could  be cured. And, as it happens, David's brother has access to a time machine. What if ... ?

Frankos's alternate history builds on her comprehensive understanding of the time period. The book is a great read, combining wish-fulfillment with smooth story-telling. If you care about Gershwin, or the American songbook, or musical theatre, or time travel, or alternate history, this book has much to offer you.

Posted by Wendy Caster at 9:07 PM No comments: