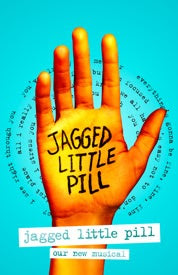 I saw Jagged Little Pill with my teen daughter, who pointed out that its upbeat ending felt a little forced, considering the ocean of issues the characters encounter in what is meant to be a single holiday season. Then again, a musical devoid of hope--especially in these dark times--is a serious breach that I suspect even peak '90s Alanis wouldn't go in for. Ultimately, I appreciate what this production tries to do, how it tries to do it, and how groovy it looks and sounds in the process.
Posted by Liz Wollman at 9:18 AM No comments:

Where Are We Now

Dutch-German performer Sven Ratzke is the best kind of David Bowie fan. When he sings his Ziggy Stardust songs, he closes his eyes, softens his face and tries to interpret the artist, not just mimic him. Ratzke's committed enough to don the skintight catsuit with the plunging v-neck and high-heeled black boots (costume design by Thierry Mugler and Armin van Zutphen). Fans of Bowie will enjoy both hits like "Heroes" and some lesser-known numbers such as "Sweet Thing/Candidate" at the U.S. premiere of Where Are We Now at La MaMa's Downstairs Theatre.

Ratzke is the cabaret version of Bowie. Pianist Christian Pabst plays beautifully, but the only rock you'll get is when he rhythmically knocks on the wood for "Let's Dance." Each song is presented after some banter where Ratzke mixes fact with fiction. Last night's show was amazing, he recounts early on, it was nine hours long with everyone rolling on the floor naked. The conversation, while often entertaining, becomes long-winded -- a wandering path of a story.

The song list seems aimless at times, too, with no discernible order or theme. Ratzke cannily seems to pick songs that match his evocative voice, with most of the selections offering intimate versions of Bowie's softer side. Most impressive is Ratzke soulful encore of "Absolute Beginners," where he showcases Bowie's prowess as a storyteller with a nuanced, personal rendition.

Directed by Dirk Groeneveld, the show's sparse set with bared brick walls and a simple divided curtain relies on lighting to heighten and slow the mood. This is not Ratzke's first Bowie outing, in 2016 he toured with Starman, including a run at Joe's Pub.

Through Dec. 21 at La MaMa Downstairs Theatre at 66 East 4 St. Two hours with one intermission. For more information, see http://lamama.org/where-are-we-now or http://sven-ratzke.com

(press seats)
Posted by Sandra Mardenfeld at 9:53 PM No comments:

Even when Company XIV produces a problematic show, it’s vastly entertaining. While the Nutcracker Rouge’s version of this well-known holiday tale loses some of its magic — relegating the role of Clara to more of an assistant narrator rather than a girl on the cusp of discovery — its vignettes provide constant amusement and titillation.

Most of the show is situated in the kingdom of sweets and the traditional first act is quickly dismissed onstage, removing most of the Staulbahm’s party (dubbed here after Clara’s godfather, Herr Drosselmeyer) and rushing through the Mouse King’s challenge of the Nutcracker.

“Snow,” Rouge’s second scene, featuring Vivaldi’s “Winter,” beautifully reinterprets “The Waltz of the Snowflakes,” which usually closes out Act I, with snow trickling from the rafters. Then the show’s tone changes as it becomes more vaudevillian with each holiday treat participating in its own sideshow for three acts. Some are readily recognizable from its source material, including numbers with Mother Ginger and the Sugar Plum Fairy. Others like Ashley Dragon on her Cyr wheel or arialist Nolan McKew, while graceful and thrilling, never offer that Nutcracker-holiday feel.

Company XIV’s artistic director/founder and choreographer often mixes genres to great success — his versions of Alice in Wonderland and Snow White, for example — but Ballet Rouge’s storyline falters, and the additions of burlesque, circus and opera limit the tale rather than exploring it in a new way.

But, there’s a reason why the show is marking its eighth year — even with its fragmented story, each scene entertains as performers sing, strut and even escape elaborate bindings Houdini style. Acts like Marcy “Operagaga” Richardson’s astound — how does she belt those notes suspended upside down?

Imbibing is encouraged, with one number celebrating the wonder of absinthe before selling it during intermission, and small tables make your cocktails easily accessible at your seat. Lilin Lace even saunters in a champagne glass as part of one routine.