John Webster wrote The White Devil in the early 1600s, and 400 years later it remains relevant and great fun. Red Bull director Louisa Proske underlines the play's timeliness with a modern-dress production, complete with cell phones and Skype. The plot is as confusing as an episode of Game of Thrones and not dissimilar in mood: unnoble noblemen jockey for power, married person A wants to sleep with married person B, person C is a murderer but charming, the powerful use the powerless, everyone has secrets, hypocrisy reigns, blood is spilled. The largely well-acted production moves along swiftly, and I suspect that Webster would be most pleased.

MasterVoices (formerly known as the Collegiate Chorale) has a long history of presenting wonderful evenings of song and theatre, and Night Songs and Love Waltzes fit right in. (There's also every reason to believe that MasterVoices' presentation of Lady in the Dark, starring Victoria Clark, will also be wonderful. For more info, click here.)

Night Songs and Love Waltzes was the work of many people, and they all deserve shout-outs.

Ted Sperling. The artistic director and conductor, Sperling loves his work and shares that love generously. And his taste and conducting are superb. When I see his name, I relax in the knowledge that I'm going to have a good time.

MasterVoices Singers. I love big groups of people singing, and MasterVoices' 120 singers sound glorious together. It's a thrill whenever they sing.

Stephen Sondheim. He's Stephen Sondheim, y'know? And his music for A Little Night Music is some of the most luscious in his brilliant and insanely rich oeuvre. Ted Sperling made an arrangement of those Night Music songs originated by its quintet/chorus--including a song that didn't make it to the finished show--and the result is sheer pleasure.

Ricky Ian Gordon. Gordon's music is often stunning, and his Life is Love, a song cycle to poems of Langston Hughes, is beautiful.

Brahms, Mendelssohn, Schumann (Clara and Robert), and Schubert. At the risk of revealing my middle-brow-ness, I appreciated rather than loved their pieces. In truth, I was counting the minutes until the work of Sondheim, Gordon, or Anderson & Roe.

The Musicians. When I initially saw cellists Peter Sachon and Mairi Dorman and the horn quartet led by Zohar Schondorf, I thought they made up an odd combination of instruments. Sperling, of course, knows better than I, and the band was terrific and just right.

Alice Tully.  Alice Tully, who died in her early 90s in the early '90s, was originally a singer but ended up focusing on philanthropy once she inherited her family's significant fortune. She pretty much paid for Alice Tully Hall, where Night Songs and Love Waltzes was performed, but she only allowed it to be named after her once she made sure it was up to her standards in acoustics and leg room. The result is a perfect venue in which to hear music, and it is much warmer in mood than its larger siblings in Lincoln Center.

All in all, Night Songs and Love Waltzes soared.

If Pretty Hurts Ugly Must Be a Muhfucka

First, behold the title: If Pretty Hurts Ugly Must Be a Muhfucka, sparkling with energy. Next, the structure: playwright Tori Sampson's dynamic, emotional play riffs on folklore, African music and dance, pop culture, teen competitiveness, overparenting, and African and Western ideas of beauty and its value, with a nod to Beyoncé (but, of course). While parts of it are familiar to anyone who has ever worried about her looks, the play is also something new, in turns thrilling, touching, and funny. This show is Sampson's New York professional debut, but we will hear from her again. (And again, and again, I hope.)


The story is simple. Seventeen-year-old Akim is held by popular opinion to be the prettiest girl in Affreakah-Amirrorikah. Her father is insanely protective of her. She has few friends. When she manages to gain a sliver of freedom she discovers that sexy, confident Kasim has a crush on her--and she is ready and eager to crush right back. Just one problem: Kasim is held by popular opinion (not including his) to "belong" to Massassi. Massassi and her friends Adama and Kaya "befriend" Akim in an attempt to get Kasim back for Massassi.

The presentation is not simple: It is narrated by Akim's cell phone (humanized as a charming, silly young man wearing bejeweled specs). Magic plays a big role. And a truly wonderful, exciting dance (choreography by Raja Feather Kelly) makes the afterlife seem extremely attractive and a great deal of fun. [spoiler] Everyone in the afterlife wears the same plain mask, freeing them all from the tyranny of looks and looksism. [end of spoiler]

For all of Sampson's playfulness and creativity, her sense of the cost of beauty and the lack thereof is deadly serious. Akim's father is a possessive idiot, but he is also correct about the dangers threatening his daughter (although his possessiveness actually makes her more vulnerable rather than less). Each of the teenaged girls knows exactly her worth on the awful, artificial, yet painfully real scale of perceived attractiveness. And the sheer exhaustion of being a young female is vividly etched throughout.


If Pretty Hurts Ugly Must Be a Muhfucka brought to mind the often mis-quoted line "money is the root of all evil." The actual quote, as found in the King James Bible, is "the love of money is the root of all evil." Similarly, neither "pretty" nor "ugly" needs to hurt. It is the exaltation of beauty--good-looking people making more money, being more popular, being perceived as better people--that causes the pain, particularly to the nonbeautiful.

In all the discussions of parity in theatre, with percentages of women and people of color getting work, etc., the emphasis tends to be on giving talented people a fair chance. What is also important is giving audiences new voices, different points of view, new forms of art. As an old-ish white woman who has seen thousands of shows, I am thrilled to be challenged and entertained and broadened by writers such as Sampson and directors such as Leah C. Gardiner and performers such as Rotimi Agbabiaka, Maechi Aharanwa, Jason Bowen, Antoinette Crowe-Legacy, Leland Fowler, Níkẹ Uche Kadri, Mirirai Sithole, Phumzile Sitole, and Carla R. Stewart, all of whom contribute mightily to the many strengths of If Pretty Hurts Ugly Must Be a Muhfucka. We all benefit when more and different people are heard.

It often occurs to me, especially lately, just how much the trajectory of any life comes down to dumb luck. Sure, people can work hard to change their lot in life, or screw up enough to piss everything away, but ultimately, it's a dizzyingly random combination of birthright, time, place, and culture that results in the access--or lack thereof--to food, water, education, safety from persecution, or parents who will buy your entry into Yale. The three characters in Boesman and Lena, Athol Fugard's 1969 masterwork currently running in a truly humbling revival at Signature Theater, are utterly devoid of luck, dumb or otherwise. Written in response to South Africa's apartheid laws, the play has only become more powerful and sad since apartheid ended. There's just so much need in the world.

Living in a place and time that has hierarchized its citizens according to how they look and to whom they've been born, the title characters have in many respects not only numbly accepted but also thoroughly internalized the sick logic that has conscripted their unrelentingly difficult lives. Boesman (Sahr Ngaujah, typically excellent) is brittle and angry and hard, and he regularly takes his powerlessness and frustrations out by beating his partner, Lena (Zainab Jah, remarkable). Lena's trauma manifests itself less violently than Boesman's, but it roils nonetheless: in early monologues, she takes careful count of her bruises and lists all the places she and Boesman have been forced from as a means of reminding herself of her own existence and remaining sanity. Both characters have to work awfully hard not to sink into despair, to give up, to destroy themselves or one another. When an old African man in his death throes (Thomas Silcott) arrives at their campsite, the tension between the couple spikes ever higher.
This is a deeply unsettling and moving piece of immersive theater that's not easy to sit through and that you should nevertheless try your damnedest to see. I haven't stopped thinking about how painful and dignified it is, how beautifully performed, how shattering. At curtain call of the performance I saw, an old man in the front row stood and repeatedly thanked the actors, who didn't break character as they stood for applause. I was too stunned to chant along with him, but he spoke for me just the same.

Posted by Liz Wollman at 8:17 PM No comments:

I've had a challenging and satisfying few hours chewing on the ideas and questions posed by Gus Schulenburg's new play Operating Systems, which I saw this afternoon. The description of the piece on the Flux Theatre Ensemble's web page includes this:


Operating Systems wrestles with how internalized oppression often makes us reinforce oppressive systems even as we work toward justice. In a tokenizing system that often positions oppressed peoples against each other, can the relationships at the heart of the play survive? Is it better to leverage the resources of these systems in service of justice, or to burn the whole thing down?

These are fascinating and important questions that couldn't be more timely. (In fact, while walking to the theatre, my niece and I chatted about Alexandria Ocasio-Cortez, with my niece ready to have AOC "burn the whole thing down" and me hoping that AOC will work more within the system.)

In Operating Systems, Code Breakers is a not-for-profit organization (with an emphasis on not, per its CEO Benita) that teaches code to high school girls of color. Originated by dot-com whiz Stephen (think Bill-Stephen-Gates-Jobs with a drinking problem), Code Breakers fights the good fight. But when alumn Bel returns there to teach, ugly secrets are revealed.

READ MORE>>
Posted by Wendy Caster at 1:39 AM No comments:

What a difference a director makes. 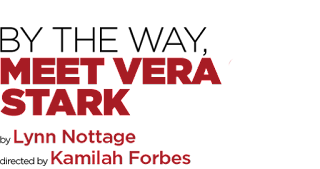 When By the Way, Meet Vera Stark was done at the Second Stage, directed by Jo Bonney, it was hysterically funny, yet hard-hitting and even heart-breaking. (Review here.) In its current incarnation at the Signature Theatre, directed by Kamilah Forbes, it is obvious, overdone, and totally lacking in emotional texture. And the second act is tedious.

The New York Times make it a critics' pick. I have no idea why.