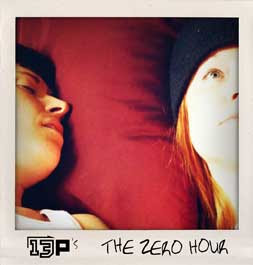 I'm not a hundred percent sure I understand everything that Madeleine George is trying to do in her compelling new play, The Zero Hour, but I am a hundred percent sure that George is an exceptional playwright with a distinctive voice. The Zero Hour focuses on the uneasy couple O and Rebecca. The happily unemployed O, whose name might stand for out, prides herself on being openly gay wherever she goes. She often feels superior to the closeted Rebecca--when she's not prostrating herself at Rebecca's feet. Rebecca loves O and is both embarrassed by and attracted to her torn-jeans butchness. At her publishing job, Rebecca is writing an introduction to the Holocaust for middle-school students--and becoming haunted by Nazis. Playwright George's goals are many: she wants to show how people lie to themselves and each other, how difficult love can be, and how homophobia can shape lesbians' lives, all without being preachy or obvious. She succeeds beautifully. Even more impressive, she discusses the Holocaust in a manner that is respectful but not rigid and even gently suggests that the usual conversations about the Holocaust may not be the right ones. She never resorts to Holocaust cliches.

The protean Hannah Cabell (O and four other characters) and Angela Goethals (Rebecca and both women's mothers) are nothing short of amazing. Each has the ability to change clothing and turn into a different person. It's not just a matter of a mannerism here or a change of voice there (though those are important); Cabell and Goethals inhabit each character to the core. Adam Greenfield directs with a sure hand; I was particularly impressed by his ability to maintain momentum despite multiple scene and costume changes. And kudos to the design team (Mimi Lien, sets; Ben Kato, lights; and Asa Wember, sound) for creating evocative environments, including a convincing effect of a train passing by.
Posted by Wendy Caster at 5:58 PM