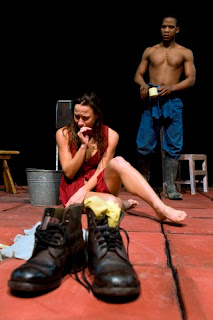 Circles loom large in Mies Julie, Yael Farber's adaptation of Strindberg's Miss Julie currently running at St. Ann's Warehouse in Dumbo. A slow fan circles endlessly above the stage. As they pass the birdcage that hangs upstage right, the four actors have the habit of sending it spinning in ever-slowing circles. The musical underscoring is less linear than it is circular: various timbres repeatedly wax and wane in intensity during the show, often in imitation of lazy mosquitoes, or rainstorms that promise to arrive but rarely do. The actors don't so much as enter as slink onto the stage, and they have been directed, often, to circle the stage slowly before joining the combative action taking place at its center. Once there, they tend to pace around one another, stalking like restless, hungry animals. The circles here don't represent the life-cycle, or power, or renewal. These circles are destructive ones: snakes viciously attacking their own tails; time that passes but changes nothing; repetitive redundancies that make up stagnant, empty, desperate lives. How I wish that the show worked for me as well as its circle imagery did.

The adaptation reimagines Strindberg's play in an isolated, rural, and very poor region of South Africa almost two decades after the end of apartheid. Julie is the daughter of the master of the homestead; John is the master's favorite servant. Christine here is John's mother, not his fiancee. John's ancestors haunt the production in the form of a walking, singing, native instrument-playing woman who wanders the stage; Julie's ancestors are ever-present in the rows of boots that John spends much of his life shining, reshining, and reshining again. Julie and John desire, envy, love, and despise one another. There is furious, frantic sex that they have near the start of the show; there are horrific consequences that play out through the rest of it. Their complicated feelings for one another--which carry with them centuries of collectively imagined and yet deeply rooted baggage about class, race, and social propriety--unravel, with increasingly manic intensity, as the 90-minute play careens toward its conclusion. There is no way out; no way to break through the endless, exhausting circles, whether through death or escape.

Yet, to paraphrase--and, at the same time, directly contradict--Gertrude Stein, Mies Julie feels like there's just too much there there. While the idea for adaptation makes good sense, at least on paper, it somehow failed to work for me onstage. The South Africa setting seems like a foregone conclusion, and yet it felt a little forced in some ways, especially when dialogue from the original play got in the way of the re-imagined setting. The ancestral Xhosa music was pretty, and interesting, but didn't connect to the action on stage as it somehow should have. The underscoring--all the building and fading, the tones that become noise that become tones again--got irritating after a while, and not, I think, in the way the production intended. Most importantly, the central relationship didn't ever become, for me, more than a serious of abstractions. Thus, while the entire exercise made perfect intellectual sense to me, I never got a true grasp of where the passion was, or what was driving it.

Some of this--maybe an awful lot of it, in fact--is my fault. I am simply not a fan of films, shows, or books in which characters are so driven by desire or love for one another that they end up saying things like, "I love you so much that I hate you," or, "I hate you so much that I love you." Sondheim's Passion was isn't a show I will be rushing back to see anytime soon, regardless of how brilliant future interpretations may be. And please, don't get me started on Jules et Jim. Perhaps I'm just not enough of a romantic, or I'm too pragmatic, or I'm just too impatient with most dramatizations of intensely mixed emotions. Or maybe I'm just an uncultured boob. For whatever reason, these sorts of entertainments are utterly lost on me. Alas, add Mies Julie to the list.

Yet a few words in my defense: When it comes to watching people self-destruct and destroy one another in the process, I want to be in on why it matters so much, and I couldn't find the connection between Julie and John, here. Clearly, many others have: Mies Julie won critical acclaim at the Edinburgh Fringe Festival; got rave reviews in the press here; has been extended past its original closing date. And when I saw it, there were plenty of intense audience reactions, indicating that many of my fellow spectators were riveted to the show. There was, to be fair, also a partial standing ovation at the end. On the other hand--and St. Ann's attracts a fairly die-hard, serious theatergoing crowd--there were plenty of moments when audience members tittered at dialogue that fell flat, or that shifted too abruptly from one mood to another. A mixed reaction, to be sure.

The show didn't cause me to titter, certainly, but then again, I was hardly moved to stand at the end, either, despite the notable intensity of the drama that had just played out before me--and the clear physical and emotional exhaustion of the hard-working actors. I was not moved, in the end, to feel anything at all, despite the hope that I, too, would at the very least be able to share in the sense of emotional exhaustion. This was a problem. But again, perhaps the problem was mine.