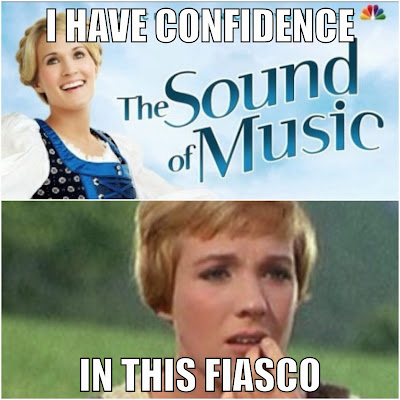 Hi, all. It's been a very long semester and I've seen very little theater, and I've missed blogging a bunch. I plan to rectify that starting....now:

Last night, along with, um, everyone, I got to watch the live broadcast of The Sound of Music, starring Carrie Underwood and a lot of other people. It wasn't great--just ask the entire population of the planet, which was busily hate-tweeting the broadcast at about forty million tweets per nanosecond. Then again, there were some sublime moments: Laura Benanti making dramatic entrances or exits; Carrie Underwood dropping her wooden facade as an actor to snuggle into her happy place as a singer; that shrieking Nazi who kept wandering in and out and giving orders to everyone near the end. And regardless of what you thought of the show as a whole, I think we have, all of us, to a musical-theater-loving (wo)man, concluded that we can now all die happily having heard a habit-draped Audra McDonald sing this to a clearly moved Carrie Underwood:


But I'm not here to review the production. Or even to talk much about the show itself, which originally opened on Broadway in 1959, and became way, way more loved once it was made into a film starring Julie Andrews and Christopher Plummer (who hated it and referred to it as The Sound of Mucous during filming) in 1965. We may all have great memories of seeing the film as small children (I know I do), and I will be the first to admit that I know every song from the show by heart. But frankly, it's kind of a flimsy musical when you think about it (and clearly, people have, enough to spoof it. A lot). This is especially the case when you think about it in contrast with some of Rodgers and Hammerstein's prior works--Oklahoma? South Pacific? Carousel? Musically brilliant, deeply layered, incredibly emotionally heavy works of art. The Sound of Music? Eh, it's nice. Here are the basics: Maria, a lousy nun whose childhood apparently sucked, is a pretty good nanny who can make clothing out of perfectly hideous (and apparently especially copious) curtains. She bonds with some guy's three-hundred kids, sings a bunch, breaks up an engagement, and after some vaguely defined fretting, marries the guy, who is really sort of a dick. Yippee! The Anschluss makes things mildly inconvenient for this prominent and ultimately totally unthreatened or endangered family of non-Jews, so they blithely skip town, making an easy getaway from those irritating Nazis and their dumbass flags. The church comes through and actually helps them escape, which is so nice of them! Again, yippee!

Whatever, I watched. And you know what? Good, laughable, and in-between, The Sound of Music Live was some of the most fun I've had watching tv in a long time, and I am eternally grateful for this fact, though I can't decide whether I am more grateful to the show itself or to the millions of people watching along with me. Probably both, since the latter would not have made themselves as present in my living room as they did without the former being broadcast in the first place.

Twitter is at its most awesome as a unifying technology, and it greatly enhanced my engagement with the musical. The broadcast itself might have had trouble negotiating the relationship between the live and the mediated, but damn if the heaping-on of one more medium didn't result in some truly enjoyable--even uproarious--spectatorship. Tweets about the show--a great many of them sharp, insightful, and hilarious--came so fast that I could read only one or two of them before a good fifty more showed up in my feed. Many of them confirmed my feelings, while many others swayed my opinions about what I was watching.

If that sounds strange to you--like I have just bluntly admitted that I am completely impressionable and have none of my own real thoughts about the theater--it shouldn't. It's what happens in live theater all the time. And I've so missed the live theater all semester that what made me happiest last night was how often the broadcast reminded me not of one particular show or event, but of the overall experience of sitting in the dark with many other people, all of whom are in some way or another passing judgments that can be intuited keenly enough affect the collective mood. Sometimes, the collective mood can be negative, and that's unpleasant--there's nothing quite so disappointing as feeling an entire house want to connect with something that it can't find a way to connect with. But the obverse is also true: there's nothing quite so wonderfully affirming as feeling an entire house erupt together into belly laughs, or gasp in realization, or well up with tears. It's like a very sanitary, anonymous group hug by a loving, benevolent entity: the anti-Borg. The many, many tweets about show had the same effect on me: on the couch with my husband but united with a much larger audience, I laughed, sniped, got nostalgic, had my breath taken away, sniped again.

Joke all you want about how lame the show was last night. What I took away from it (aside from the fact that, according to a friend who worked behind the scenes on the show, getting Nazi banners as well-made as those displayed late in the musical is an enormously difficult thing to do) is that musicals remain monumentally important, even if (or maybe precisely because) people like to make fun of them sometimes; that it was awfully brave of everyone involved to try this experiment; that our entertainment has become so fragmented that it's thrillingly powerful to know that so many of us are watching the same thing at the same time; and that I need to get myself back to the theater as soon as I possibly can.

Oh, also that Audra McDonald is bionic, and that DiGiorno Pizza is the groovy, hilarious opposite of Barilla Pasta. 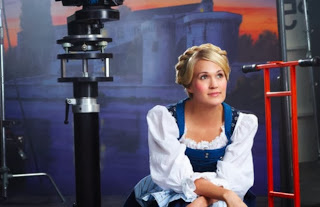 Posted by lizwollman at 5:44 PM