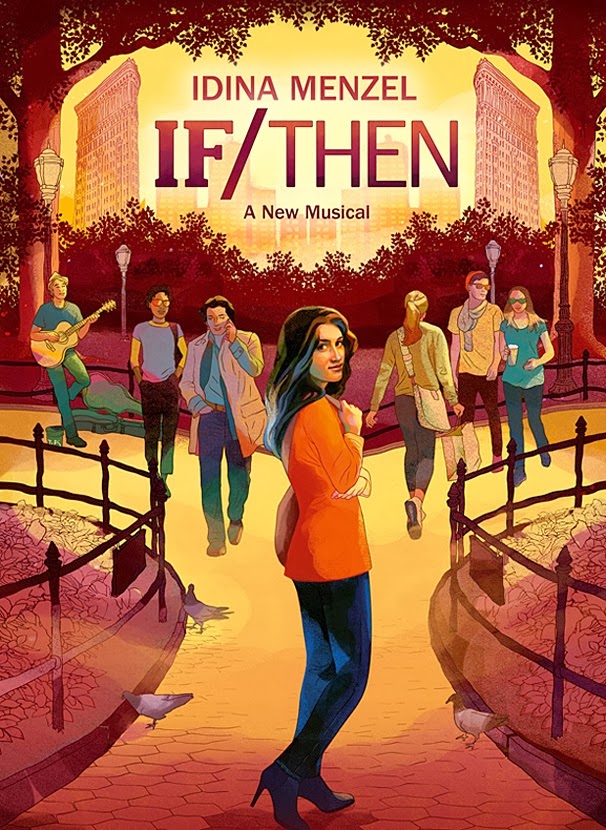 If/Then, an original musical by the Next to Normal writer/composer team of Brian Yorkey and Tom Kitt, has a great deal going for it: a dynamite cast headed up by the bona-fide Broadway star Idina Menzel; a strong supporting cast featuring talents like LaChanze, Anthony Rapp, and Jerry Dixon; the Rent and Next to Normal director Michael Greif at the helm. The score, which bears some strong similarities to that for Normal, reflects real growth by Kitt--whose bouncy, contemporary melodies are perfectly suited to Menzel's distinctive brass--and especially by Yorkey, whose lyrics for Normal felt a titch too obvious a titch too often, and whose lyrics here are, for the most part, sharper, savvier, and more organic. And the musical's "road not taken" concept is, if not entirely original (Robert Frost, Frank Capra, and Gwyneth Paltrow got to it before Yorkey and Kitt did), certainly fresher and more challenging than, say, taking a classic movie about a boxer who slurps raw eggs and punches meat and plunking it onto the stage. If/Then has a lot of imagination and a lot of talent behind it. It thus pains me to say that I found it to be an overcooked, ponderous, frustrating musical.

If/Then has two simultaneous plot-lines, both of which feature the same characters doing slightly different things, so it's easy enough to lose track of what's going on sometimes, especially in the long, overstuffed second act. The gist: A brilliant urban planner named Elizabeth, pushing 40 and recently divorced, returns to New York City after a decade of unhappy marriage in Phoenix. During the musical's first scene, Elizabeth goes to Central Park to meet up with two of her old friends, who do not know one another: Kate (LaChanze) is a kindergarten teacher; Lucas (Anthony Rapp) is a community organizer and activist. When they meet and the introductions are made, Kate announces that Elizabeth should start referring to herself as "Liz" in celebration of her new life, and then suggests that they spend the rest of the afternoon in the park. Lucas, on the other hand, calls Elizabeth "Beth,"which is how he knew her back when they were in college together. He suggests that they leave the park and attend a fair housing rally in Brooklyn.

The rest of the show follows Liz, who remains in the park with Kate and meets a man who becomes her husband, and Beth, who leaves the park with Lucas, runs into another college friend who gives her a job in the city planner's office, and becomes a respected career woman. While the two paths Elizabeth takes have significant overlaps, there are divergent outcomes: Liz and Beth both get pregnant, but by different men, to different ends and with different consequences. Liz and Beth both make compromises--the former chooses work over family, the latter marries and has kids, and demeans herself professionally by taking what we all know is a fate worse than death: an academic job. I like to think that in New York City in 2014, a woman like Elizabeth could have a successful, satisfying career and a fulfilling family life, but I guess if this were the case, there'd be no point to If/Then at all.
Kate, Lucas, Elizabeth's boss, and the man she meets in the park and either does or does not marry are all affected by the subtle differences that result from Liz/Beth's divergent directions: they do or don't partner, marry, get divorced, devote themselves entirely to their careers, consider having affairs, die. Both story-lines resolve clearly enough to imply that regardless of what they all end up doing, and regardless of how fate and choice direct their lives, Elizabeth and the members of her social circle will all be fine.

Which results in a very big problem: the characters in If/Then are not all that interesting, and the things that happen to them during the show, regardless of plot-line, are not especially compelling. Sure, maybe it's entertaining in and of itself to watch a bunch of affluent, educated, urban 40-somethings negotiate the onset of middle age together; it's certainly been done to death on television and in film, and far less often on the musical stage. And If/Then is surely one of the few musicals to feature jokes about organic food, urban farming, and the current hipness of Brooklyn, or to weigh in on the lack of affordable housing in New York City. But the show fails to demonstrate why we should be spending an evening (or, on Wednesdays and weekends, a significant portion of our afternoon) with these particular characters in this particular place. I listen to similar dialogue on the F train to and from Brooklyn almost every day.

I take it, then, that I am one of the people If/Then purportedly represents. Like Elizabeth, I am a straight, white, urban, well-educated, middle-aged professional woman who has made choices and taken risks on both the personal and career fronts. Like Elizabeth, I have been both blessed and cursed by fate and the choices I have made at various points in the course of my life. Like Elizabeth, I have a circle of friends--some gay, some straight, some in-between--who I love and rely on, and who I encourage to rely on me. Like Elizabeth, I live in a city that I find frustrating and wonderful in equal measures. And like Elizabeth I sometimes wonder about the many roads I have not taken. If/Then is, thus, at least broadly speaking, a show about my people and my world.

Which is why it really bugs me that I could not, at any time, connect with the unreal characters or the unreal city that the musical depicted. Some of this is certainly the result of the unorthodox structure: If/Then's two plot-lines yield twice the exposition, twice the (ultimately very similar) outcomes, twice the possibilities, twice the big musical numbers. And the time spent establishing two different story-lines draws away from anything much deeper than cool coincidences and fateful choices and how they intersect. The characters are universally thin and wooden, and while I kept trying--really trying--to remain interested in them, I kept coming up short.

I can't decide if this is the problem with the book, the direction, or the acting--maybe it's all three in some cases. I don't think the problem lies in the score, which I look forward to getting to know better, and which features some gorgeous songs with deeply emotional, penetrating lyrics. Perhaps Yorkey's attention to the score here drew some of his attention away from the book? No idea. But something is missing. Yes, Idina Menzel tears the roof off the house on a regular basis. Her thrilling eleven o'clock number, filled with hope, rage and a final roar of defiance, delivers sparks of honest emotion that I was momentarily, gratefully moved by. But between the songs, Menzel has lines that seem clunky and forced, so her character comes off as flat at worst, icy and distracted at best. For all the time she spends on the stage, I came away not caring much about Elizabeth, or deducting much more than what the copious exposition told me about her in the very first scene.

Same goes for Elizabeth's friends, who are even more one-dimensional than she is. Perhaps this is because they are treated throughout If/Then as her support system, but are never given independent inner lives of their own. Yes, sure, we all worry about our friends and relations sometimes, but to spend an entire musical doing so seems sort of silly here: whether she is a powerful career woman or a wife and mom, Elizabeth pretty much has her shit together, so what's to fret about? Don't we all have ups and downs in our lives? Don't we all wonder about whether we should mate, have kids, switch careers? Don't Kate and Lucas have enough going on in their own lives to occasionally focus on themselves? Why are they so obsessed with every damn thing Elizabeth does? What do they find so interesting about her, and what the hell am I missing?

To the credit of all involved, neither supporting character--Kate, a black lesbian, and Lucas, a white bisexual man--plays to stereotype (though Rapp doesn't show much growth here, since he's playing basically the same character he originated in Rent). And at the very least, Kate has some character traits of her own. Her poor girlfriend/wife Anne (Jenn Colella), who rarely speaks and who spends most of her time onstage with her arm wrapped around LaChanze's waist, seems to exist merely to drive home the fact that Kate is, in fact, a lesbian. In case there were any question. Which there shouldn't be, because Kate's sexual preference comes up repeatedly in just about every scene. Why? Is this show congratulating itself for being hip and contemporary by featuring queer characters? You know, on Broadway? Haven't we moved light-years beyond this?

Apparently not. This show, which purports to celebrate New York City and its wonderful, diverse interconnectedness, shows its audience a city that is mostly white, mostly thin, mostly affluent, mostly young, and overwhelmingly heteronormative. I recognize that every artist who depicts New York City--from Hubert Selby, Jr. to Woody Allen to Spike Lee to Lena Dunham--shows only a narrow slice of it, and I'm not faulting If/Them for limiting itself in focusing its attentions on one sliver of the city's population. That being said, it's hard to take songs and speeches and scenes about the wonderful richness of diversity and interconnectedness and multiculturalism seriously when the cast of overwhelmingly like-minded characters spends so much time agreeing with each other, reminding each other about how urbane and accepting they are, and occasionally expressing bewilderment (but, ultimately, acceptance!) about the fact that Beth is married to a Republican. If/Then actually hits close to home in this case, probably inadvertently so: New Yorkers can be a lot more provincial and segregated than we like to think we are, despite--or maybe because of--the fact that we all live on top of one another.

I suspect that the second act features the enormous and fairly ludicrous amounts of drama that it does precisely because Elizabeth and Friends and the Big City they live in are just not interesting enough to sustain an entire show. Instead of a gradual winding down to a satisfying conclusion, If/Then ramps it up in act II. Depending on the plot-line, there's a marriage or two or three, an abortion, a falling out, a divorce, a baby or two or three, a violent death, an almost-plane crash, several dramatic monologues and soulful ballads, and some Great Moments of Realization. By the time we got to the plane crash, I started feeling like maybe I was going to be trapped in the theater forever.

And for all I know, there is another version of me who is still stuck in there, doomed for eternity to sit around listening to like-minded people chat about organic food, career and family planning, their sexual preferences, and how nice it would be for New York to be more affordable for people they never actually interact with. I sure hope that version of me is happy with the choices she made in purchasing a ticket to see If/Then. Meanwhile, the version of me that is writing this blog entry has moved on with my life, though I occasionally pause while going about my day to wonder if there's a sale at the Potterville Lululemon.
Posted by Liz Wollman at 12:00 AM