This is Our Youth 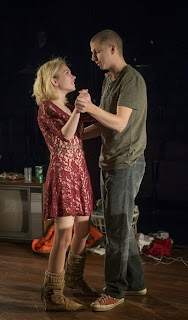 In 2014, a play written in 1996 and set in 1982 is making its Broadway debut. Still with me? The play is This is Our Youth, the first major work by Kenneth Lonergan, who went on to earn an Academy Award nomination for the smart and touching film You Can Count on Me and make the Pulitzer shortlist for The Waverly Gallery. Some might consider This is Our Youth a modern classic: the acclaimed, extended original run in New York is often cited as a breakthrough not just for Lonergan but its original star, Mark Ruffalo; a long-running London production featured the likes of Matt Damon, Jake Gyllenhaal, Anna Paquin, Freddie Prinze Jr., and Chris Klein, to name just a few. Nearly twenty years after its premiere (and thirty years after it’s meant to take place), it’s on Broadway for the first time, in a production that’s billed as a “comedy” and coming direct from a well-received run at Chicago’s Steppenwolf Theater. I suppose the question is, does the play stand the test of time?

My answer, in short, is no. This handsome but lifeless production, staged by Tony winner Anna D. Shapiro and featuring the Broadway debuts of Michael Cera, Kieran Culkin, and Tavi Gevinson, shows that what was once perhaps an immediate and recognizable appraisal of the play’s title “youth” has become not much more than a creak-ridden museum piece. It doesn’t help, either, that one member of the central acting trio is severely miscast.

The comedy (to use the production’s classification, although I didn’t hear many laughs at the performance I attended) begins after midnight in the apartment of Dennis Ziegler (Culkin). A small-time drug dealer who is supported by his wealthy but distant parents, Dennis is happy to move through life smoking weed, working intermittently as a bike messenger, and continuously fighting (then reconciling) with his unseen girlfriend, Valerie. That is, until his stoner idyll is broken by the appearance of Warren Straub (Cera), an awkward burnout who’s just stolen a large sum of money from his potentially criminal father. Much of the action of the play centers around whether or not Warren should return the money before his father finds out its missing, and what the consequences will be if he doesn’t.

Dennis and Warren are meant to have something of an exasperated rapport; Warren is a client of Dennis’ who is regularly delinquent on his accounts, and whose very presence seems to add an air of annoyance to the room. Within five minutes of his arrival, Warren manages to destroy a sculpture made my Valerie, which causes Dennis to go into serious relationship damage control (replete with language I won’t repeat here). Their bickering banter is meant to crackle, a kind of back-and-forth patter translated into Me Decade stoner parlance, but it never seems to get off the ground. Cera and Culkin are far too tentative, as if they’d just met moments before taking the stage.

Warren also pines for Jessica Goldman (Gevinson), a young fashion student who tries to act more experienced in all things than she really is. That Jessica is played by a young woman who became famous for starting a fashion blog while in her teens is something on the verge of double-consciousness; Gevinson is a novice actor playing a novice person. In her case, though, it mostly works. She nicely acquits herself, considering this is her first leading role of any kind (she had a brief supporting part in Nicole Holofcener’s film Enough Said last year, and was seen on an episode of NBC’s Parenthood). She betrays no discomfort on stage, and her pleasingly off-beat voice—dark and dusky—is not what you’d expect from a petite, blond Midwestern teenager. If she continues to hone her craft, Gevinson could have a promising acting career.

Cera, on the other hand, has been acting since his pre-teen days; he and Culkin previously headlined a production of this particularly play in Sydney, Australia, in 2012. Despite this being his third go-around as Warren, there is little evidence that it’s a great marriage of actor and role. At the performance I attended, Cera often barked his lines; I couldn’t tell if it was an attempt to play up some of his character’s latent humor, or simply his manner of playing to the back of the house. Whatever’s the case, it’s not working.

Culkin played the role of Warren for a time during its long London engagement; here, he takes on Dennis, who, despite going through life in a regularly altered state, seems to have more of an awareness of himself and contemporary society than anyone else. Dennis is technically the “straight man” to Warren’s manic, unhinged youth; he uses his parents to fund his lax lifestyle, playing into their sense of liberal guilt (and/or general dislike of him), and makes no pretense about his role in the world. He’s a dealer, a stoner, a slacker. Culkin’s stage chops are evident in his performance, though I couldn’t help feeling that he was a bit too detached from the proceedings at times. Dennis is meant to alternately rage at and comfort Warren. Culkin, however, remained fairly even-keel throughout.

As I was leaving the theatre, an older woman turned to her companion and said, “well, if there was a point to any of that, I missed it.” It’s a statement that could be applied to both this particular production and the play itself.