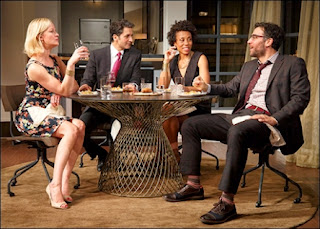 photo: Joan Marcus
Disgraced, Ayad Ahktar’s Pulitzer-winning powder keg of a play, is finally making its Main Stem debut. Produced once again by Lincoln Center, it has arrived at Broadway’s Lyceum Theatre without losing a smidge of its volcanic force. Smoothly directed by Kimberly Senior (who helmed the previous Off-Broadway production two seasons ago) and performed by a peerless cast, this is easily the most thought-provoking, entertaining, and frankly, chilling piece of theatre currently in New York.


The play centers on Amir (Hari Dhillon, repeating the role he created in the successful London production), a successful New York lawyer of Pakistani-Muslim descent. A self-described “apostate,” Amir holds little regard for religion in general, and his own in particular—much to the dismay of his wife Emily (Gretchen Mol), a white artist working on a series of painting inspired by Islamic art, and his nephew Abe (the superb Danny Ashok, also of the London production), a devout Muslim.

The major events are set in motion when Abe asks his uncle to appear on behalf of an imam who is being imprisoned under false charges of financially supporting terrorism through his mosque. Amir—who changed his surname from “Abdullah” to the more Hindu-sounding “Kapoor,” and is loath to give off any indication of his Islamic background—is initially reluctant. He eventually agrees to attend the hearing, at Emily’s insistence, which causes him professional distress when he is mentioned in a New York Times article as the imam’s counsel.

The red meat of this brief drama takes place over the course of a dinner party given by Emily for Isaac (Josh Radnor), a curator who is including her pieces in his upcoming show. Isaac is married to Jory (Karen Pittman, the only holdover from the Off-Broadway production), a lawyer who works with Amir at the same firm. Like Amir and Emily, Isaac and Jory are a mixed-race couple—him a white, Jewish Midwesterner; her, an African-American from the South—and the evening’s conversation eventually devolves into a heated argument over how we define ourselves along racial, cultural, and religious lines. I won’t spoil any of the particulars of this meticulously plotted and performed scene, but it’s safe to say that you’re likely to have trouble catching your breath once this exquisite foursome starts cooking.

Dhillon’s superb performance is the anchor of the play. It’s a stunning slow-burner, building to seismic climax. Amir is the kind of man who believes he has it all figured out, until it becomes apparently clear that he doesn’t. Dhillon conveys this to a staggering degree.

The rest of the ensemble is uniformly fine. Mol strikes a perfect balance of wryness and naiveté that compliments the complexities of her character. Radnor is assured and often quite funny as Amir’s chief adversary, yet he can build to an authentic rage when necessary. Pittman reaches extraordinary depths with very little stage time. And in a small but pivotal role, Ashok speaks volumes. It’s easy to see why importing him from London was essential.

My advice would be to see Disgraced as soon as possible. Once the rave reviews start pouring in, I imagine tickets will be hard to come by. And this is not one you’ll want to miss.