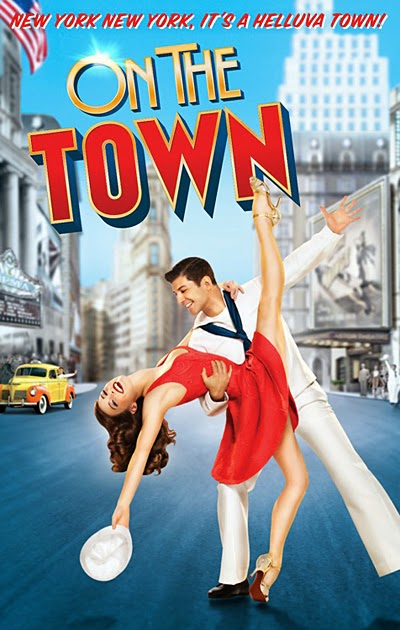 As Carol Oja points out in her new, excellent book Bernstein Meets Broadway: Collaborative Art in a Time of War, the 1944 musical On the Town is not nearly as well-known or celebrated as Jerome Robbin's and Leonard Bernstein's 1957 collaboration, West Side Story. It's also not as cohesive or as deep, which is not to imply, at all, that it's bad. It isn't--especially in joyful revival at the historically cursed Ford/Hilton/Foxwood/Lyric Theater.

A landmark work that is perhaps celebrated less for its aesthetic achievements than for its introduction to Broadway of a young, superlatively talented, and enormously influential creative team (Bernstein! Robbins! Betty Comden! Adolph Green!), On the Town was the result of disparate elements that were blended together in a hurry. Based in part on the short ballet Fancy Free, which premiered to enormous acclaim at the Metropolitan Opera House in April 1944 (and which you can see in its entirety here), On the Town was expanded into a full-length musical that opened on Broadway in December of the same year. Still deeply rooted in dance and, like Fancy Free, primarily about three sailors on shore leave, On the Town's book and lyrics were added by Comden and Green, who drew largely from material they'd been using in their nightclub comedy troupe, the Revuers (which also featured Judy Holliday, and for which Bernstein sometimes served as pianist).

The resultant musical is as dense a mix of highbrow, middlebrow and lowbrow elements as the disparate influences imply: moody classical dance sequences are accompanied by Bernstein's symphonic scoring, while hips grind suggestively to his jazzier, bluesier numbers. Other numbers are all about wide-open, smiling faces and optimistic Broadway brass. Through the show, erudite, elitist characters mix easily with crasser, coarser ones. There are ridiculous plot-lines and moving ones (sometimes, these are one and the same). There are subtle jokes, corny jokes, recurring jokes, cheap jokes, dirty jokes.

The fact that On the Town manages to blend high- and lowbrow elements into a fairly unified whole is, of course, a testament to the original creative team but now, also, to the new one. Director John Rando is a very funny, amiable guy who I've seen speak and have met once or twice in passing. Despite hardly knowing him at all, I nevertheless found, as I watched the revival, that I could picture him laughing a lot during rehearsals, and the cast along with him. Believe me that this is a very good image to have in the back of your mind when you are watching a show that is already fun and energetic in the first place.

While I am woefully, inexcusably moronic when it comes to dance, it is clear that choreographer Joshua Bergasse has attempted to remain true to Robbins' original choreography, but also to update it by infusing it with a more obvious, underlying sexual energy, and moves that are a little rougher around the edges (you can read a far more knowledgeable piece on the show's choreography here).

This all makes perfect sense, at least to me, because let's face it: highbrow or lowbrow, a whole lot of art is, at essence, about sex. And the desire for sex is the one thing that brings all the various aspects of On the Town, whether they be highbrow, lowbrow, or somewhere in the middle, together.

Come now: if you have somehow managed to fool yourself into thinking that people didn't have (or want to have) sex in the 1940s, you're a moron. Dig it: three sailors have been off at sea with war on their minds. They've been given 24 hours of shore leave. What the hell do you think they're gonna go after? It hardly hurts that they're spending their leave in a city that, like the rest of the country, has shipped a great many of its young, able-bodied men overseas to fight for a long of time. What On the Town is about in a nutshell is horny people (who can sing and dance well).

In short, sex is what drives the frenzied (if always cheerful and doggedly optimistic) proceedings in On the Town, which starts with the sailors' shore leave. Despite the most innocent sailor's initial desire to actually spend the day touring the city, all three buddies quickly drop the bullshit and set about finding themselves some womenfolk who, it turns out, are all most happy to oblige. With a few exceptions, the supporting characters in the show, many of whom turn up repeatedly, all seem pretty sex-starved as well.

An entire musical about the urge for naked time with . . . well, hell, with anyone willing, may not seem all that wholesome, but it is when it's expressed with a gee-willikers--listen-see attitude, ample double entendre, liquid dance moves, and excellent singing by a smiley, winning cast. You really can't go wrong, here. Especially when the entire package is wrapped up in those delicious, distinctive Leonard Bernstein harmonies and dissonances, which easily fill the second-largest theater on Broadway.

A word, while (if) I still have you, on the theater itself: Since it opened in the late 1990s, the Ford/Hilton/Foxwoods/Lyric has suffered some pretty bad mojo. Now, granted: it's not as ugly as the district's biggest house, the Gershwin. Then again, for all its poured-concrete hideousness, the Gershwin has been happy home to Wicked forever, and its name hasn't been changed since 1983, when it stopped being called the Uris. So I don't feel bad for the Gershwin, not even a bit.