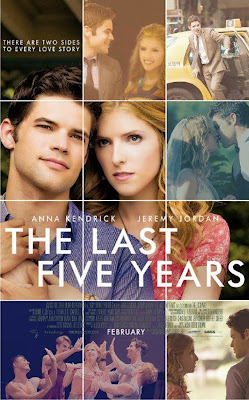 The film adaptation of Jason Robert Brown's The Last Five Years is remarkably faithful to its source material. That is not necessarily a good thing.

Strictly speaking, this musical (which premiered Off-Broadway in 2002, and was revived in 2013) would not strike anyone as a clear candidate for cinematic treatment. Both the style and the structure are intensely theatrical. Performed in one act, with two characters, and almost entirely sung-through, The Last Five Years chronicles a relationship using a parallel storytelling technique: one story line (the husband's, Jamie) is told chronologically from beginning to end, while the other (the wife's, Cathy) begins at the end of their marriage, and works backwards towards their first date. Despite some issues I have with the story (it's far too kind to Jamie) and the score (Cathy's material is far more interesting, both musically and dramatically), both productions largely worked.
What works in a theatre doesn't always translate to other media. Adapter/director Richard LaGravenese remains true to Brown's concept, but by choosing to add as little dialogue and scene-work as possible, the result often feels like a ninety-minute music video. (The kinetic editing does nothing to assuage this). The actors struggle to create their characters and define the relationship. And fine actors (and singers) they are, though neither is particularly well-cast.

As Jamie, Jeremy Jordan reads more like a frat-boy than a wunderkind novelist. (When he sings the line "I wrote a book and Sonny Mehta read it," you're not convinced he's ever heard of the literary legend). He conveys neither Jamie's bravado nor his latent self-doubt, which makes some of the character's more self-destructive choices seem hollow. Anna Kendrick's voice is pleasantly melodic, though not particularly interesting; even when Cathy is supposed to be anguished, Kendrick sings sweetly and strictly sticks to the vocal line. I missed the dark-hued emotion that Sherie Rene Scott brought to the role.

Due in large part to the cast recording made after the original production's brief and unsuccessful run, The Last Five Years has gained a legion of devoted fans, verging on cult status. Watching the film, I'm sure many will rejoice. Yet I suspect it will cause just as many to hold their original cast recordings just a little tighter.

[In Manhattan, The Last Five Years is playing exclusively at Village East Cinemas on Second Avenue. Video on Demand customers can rent the film for $7.99, and both the film and its soundtrack are available on iTunes.]
Posted by Cameron Kelsall at 12:22 PM