We at Show Showdown seem to be in a Public Theater frenzy right now, but their season has just begun, it's very promising thus far, and I love the Public something fierce, so I'm happy to keep spreading the love. Especially since I just saw Eclipsed, Danai Gurira's moving, informative, brilliantly feminist play, in the appropriately intimate LuEsther Hall. Eclipsed was superbly acted by a cast of five women under the skillful direction of Liesl Tommy. I am glad to have seen it and haven't stopped thinking about it since I did. 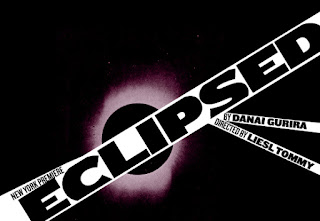 War-is-hell stories tend to focus on men: men going to war, men bonding and dying in war, men returning home broken from war. But Eclipsed, which tells its story unflinchingly and without condescension, emotional sog, or melodrama, examines women's roles in wartime. The play takes place during the second of back-to-back civils war in Liberia (the first began in 1989 and lasted through 1996; the second started in '99 and lasted until 2003).

Central to the plot of Eclipsed are three captive women who are being kept as the wives of a rebel officer. Helena (Saycon Sengbloh), referred to frequently as Number One, has been held so long that she can't remember how old she is. She has a close if contentious relationship with Number Three, whose given name is Bessie (Pascale Armand). The newest addition to their small, spare, bullet-ridden home is a young woman--a child, frankly--who has found refuge with them after her village was raided. She is known only as The Girl (Lupita Nyong'o). For a while, the older women attempt to hide The Girl from the officer, but when he discovers and begins raping her as he does the others, the three settle into a strange domestic rhythm. They cook, clean, joke, do one another's hair, try on the clothing the rebels bring them, tell one another stories. (The Girl can read, and often does, from a trashed copy of a Bill Clinton biography, the only book the women have.) They pointedly do not refer to one another by their names, which might remind them of happier, easier past lives. Their daily tasks and rituals are almost unsettlingly normal, all things considered, and this is precisely the point: thinking too hard about the bigger picture--where the clothing comes from, what has happened to their friends and families, their daily treatment at the hands of the officer, what will become of the baby Bessie is carrying--could crush them, and they're too busy surviving to let that happen.

The Girl seems to take so calmly and unemotionally to her new situation that the other women worry about her, and for good reason: she's not nearly as accepting of her lot as she insists she is. She is soon lured from the women's quarters into battle by Number Two (Zainab Jah), who left the fold to fight, and who promises The Girl that going into battle is far more empowering than serving as a concubine. Rita (Akosua Busia), a member of the Women of Liberia Mass Action for Peace, also visits the women regularly, both because of the work she does and for more personal reasons that are not disclosed until near the end of the play.

Of course, The Girl learns the hard way that the front is no better or worse than captivity--it's merely a different kind of hell. No longer serially raped herself, she suddenly finds herself in charge of coldly rounding up the women and girls who will be. She is witness to unimaginable horrors, and expected to participate in them. And while the gun she carries keeps her from being forced into sexual servitude, she learns that women in the rebel forces frequently resort to sex, anyway, in exchange for favors from the male soldiers. Any expression of concern or regret she allows herself is harshly shouted down, and as her time at war wears on, her coping tendencies begin to fray.

With Eclipsed, Gurira does a superb job of demonstrating the ways women survive the worst possible situations. The cast is universally strong, but I was particularly taken by Sengbloh and Armand, whose ravaged characters are also the most practical and optimistic about their plight. And Nyong'o's Girl was so perfectly serene, dazed, and extraordinarily young-looking--so deeply immersed in her role--that it took me a while to realize who she was.

Eclipsed ends perhaps a bit too tidily, but then, the more I think about it, its ending still implies that despite their limited options, the women--survivors all, despite varying degrees of emotional damage--will continue to seek ways to avoid victimhood, and to move beyond the hell they've experienced. After what they've been through, perhaps the promise of hope the ending suggests is the very least Gurira could do for her finely-wrought, iron-strong characters.