Don't tell anyone, but until earlier this month, I'd never seen the stage or film version, or even listened to the score, of Hello, Dolly! This is kind of like a Vermeer specialist admitting she's never been to the Frick, a professional chef who's just never gotten around to cooking with rosemary, or a linguist who has a pretty good grasp of every Romance language except French. Oh, the shame! Aside from the titular song, which I've heard plenty because who the hell hasn't, I've never once crossed paths with the show. The current Broadway revival thus appealed to me less because of the allure of Bette Midler (though I'm sure she's swell) than because I could finally stop acting all nonchalant and informed whenever someone mentioned Dolly in conversation. Which, in my circles, happens way more often than you probably think. 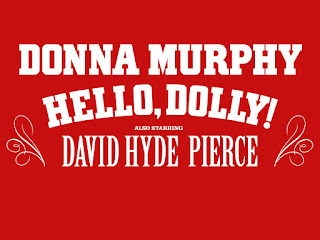 Yippee! I've officially seen Hello, Dolly! and guess what? It was downright delightful. No offense to Midler, but I'm glad I got to see Murphy, who's shiny, bright-eyed, cheekbony, and goofy in the titular role. She's clearly enjoying playing to an adoringly receptive crowd (don't forget that she, too, has an ardent fan base and megatons of theatrical street cred). As Dolly, she's being over-the-top, stagy, playful Murphy--not super-serious, Passion-y, buried-deep-in-the-role Murphy. But that's exactly the right choice: the production, while perhaps not as glorious or storied as the long-running 1964 Merrick original, is great fun that no one in the cast takes too seriously, and that no one in the audience should, either. Especially since the plot kind of makes no sense and only gets stupider the more you think about it.

This revival of Hello, Dolly! strikes me as best received for the musical's flaws, not despite them. It's a bubbly, affectionate history lesson: a living reminder of the kind of sturdy, spectacular, joyfully imperfect show that dominated Broadway for decades during the so-called Golden Age, and that was already becoming kind of passe when Dolly first appeared. I say this as someone who favors contemporary musicals: seeing an old-school one, especially one done as well as this one is, can really be something special.

The production is pretty to look at, from the intensely colorful period costumes to the old New York backdrops. And the cast does a fine job of reminding spectators what Broadway used to rely on for spectacle before LED projections and digitally controlled hydraulic lifts came along. Performances are broad, hammy and winking. Take, for example, David Hyde Pierce's turn as Horace Vandergelder, whose honking New Yawk accent is as over-the-top as the enormous moustache that threatenes to swallow his face. Or the always delightful, scenery-chewing Jennifer Simard, as an Ernestina who puts extra oomph in boorishness. The choreography is hardly subtle, either: The Waiter's Galop, which features the male dance chorus soaring over the orchestra pit (here covered in mesh downstage center), brought the house down. Then again, so did the mere sight of the red velvet staircase on which Dolly subsequently makes her grand reentrance. Even the set, then, attains the status of musical theater royalty when it comes to this particular show; what, pray tell, would the Broadway musical be without its countless divas descending as many staircases?

Seen at present, the show has additional pleasures, at least for me, at least from a gender perspective. As broad and unsubtle as Dolly is, there are plenty of unspoken opportunities to honor the history of gay labor on Broadway, which is of course now far more open and acknowledged than it was in 1964. The fact that the two (straight) romantic male leads, Horace and Cornelius, are played as effortlessly and as beautifully as they are by prominent, proudly out gay men somehow adds a layer of enjoyment, and the chance to revel in how far this country has come in some ways, even as we are stepping rapidly backward in others. I can't help but think that Charles Nelson Reilly, who originated the role of Cornelius in 1964, surely went about the role in as grossly stereotypically a manner as Reilly went about everything. (There's something horrifying about the thought of Reilly in the role back then, claiming never to have kissed a woman by his mid-thirties, to the knowingly condescending guffaws of the straight people in the audience.) Creel, on the other hand, is subtle and earnest and touching in the part; the ghost of Reilly, bless him, does not hover about the proceedings. (That said, I like to think that during rehearsals, jokes about Cornelius's inexperience with women at his age were fast, furious, and absolutely filthy.) Dolly herself, long embraced as a gay icon, no longer stands alone as the only obvious representative of a culture that, even while forcibly closeted, has in large part given us this art form: she's a brassy, loud, independent-minded protofeminist, surrounded by gay men who are free to focus the enormous energies they once poured into coding elsewhere.

I'm pleased to have finally seen a production of Hello, Dolly!--and especially delighted to have had it be this one. Brava, Ms. Murphy. Kudos, cast and crew. Keep on celebrating this show, this genre, this history. We're right there with you.