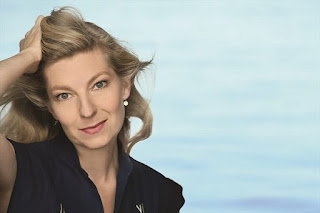 This awkwardness was beautifully mirrored in Beaty's physicality. She brought each age to life, from the teenager literally speaking with her mouth full of food to the middle-aged woman tensing up at the presence of a younger man's body. The play revolved around her and rightly so--I was spellbound the entire 90 minutes. My actor friends in attendance found themselves mimicking her tics afterwards because they were that powerful.

Maggie made a big impact on me as well, perhaps because the name caused me to sit up and pay attention! Though she did not remain on stage long, every time she entered, I found myself waiting to see what she would do. Like Sorrel, she represented a force that could not be tamed. Though older brother Carol (Edison) fulfills every possible dream of her conservative, upper-class parents, Maggie is accused of "going off the path" by getting pregnant at a young age and keeping the baby, Lola (Gabriella Albino). It is Maggie who states matter-of-factly that Sorrel has slept with another man, discerning the fact before Sorrel can even bring the words to say so. And yet, Maggie does not shun her for it--she states clearly and plainly that she loves Sorrel.

It was this relationship between Maggie and Sorrel that had me catching my breath and creeping toward the edge of tears. Sure, the intimacy between Sorrel and her four beaus was breathtaking and uncomfortable at turns (thanks to Intimacy Coach Siobhan Richardson), but it was watching this deeply important female friendship that felt so new and revolutionary. In it, I saw the relationship I have with my best friend. I watched it surrounded by a group of women that challenge and support me, all oohing and aah-ing together. It should not be so revolutionary to see this reflected on stage, but it is. And I would challenge anyone who still thinks women protagonists are not compelling after watching Bunny.

The stage design brought vibrancy and a feeling of familiarity to Sorrel's story with its circle of astroturf. I could write a whole other review on the design of the costumes, lighting, and sound, but suffice it to say here that each combined to clearly set the age of Sorrel and setting for each scene so much so that they almost disappeared.

My only complaint was putting Lola as a young woman on stage. Though she did mirror Sorrel at a young age, her physical presence didn't feel necessary to move the story forward.

There is more Hannah Moscovitch coming in 2018. What A Young Wife Ought To Know opens at Crow's Theatre in March and for those of you reading from the States, you can see Old Stock: A Refugee Love Story at 59E59 Theaters from March 8 to April 22.

*Complimentary ticket to community night. We sat in the center of the fourth row.