The World Only Spins Forward: The Ascent of Angels in America (book review)

It's difficult this week to agree with the title The World Only Spins Forward. But in the story of Angels in America, the world did spin forward, as shown by this fascinating, informative, and even exciting oral history. 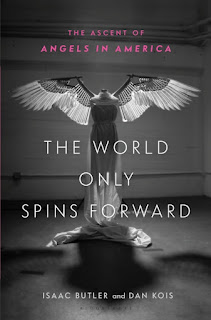 Assembled by Isaac Butler and Dan Kois, The World Only Spins Forward is clearly the result of thousands of hours of interviewing people, editing the interviews, finding a structure, reading old articles and reviews, and stitching everything together into a truly impressive quilt. The book is largely chronological but some chapters focus on particular characters. Also, the occasional sidebar delves into other aspects of Angels' life; in one, people discuss the challenge of teaching Angels in college. (One professor says that her students don't always get references to The Wizard of Oz. That makes me sad.)

But Angels--and of course its playwright, Tony Kushner--vibrated with genius and importance from the very beginning, and people made enormous contributions to keep it going. From coast to coast, artistic directors made space for Kushner to keep writing, and writing, and writing, and producers took financial risks to make sure the work was seen. And the performers! In one case, an actor memorized a 12-page monologue overnight so it could go into the next performance. This is just one example; dozens of people worked their butts off for and in this play.

Butler and Kois do a nice job of making the book readable. For example, I appreciate that they reintroduce people anew in each chapter. Also helpful are the short bios at the end of the book, which largely list a person's relationship to Angels along with a glance at other work, as in:


JACOB SCHMOE: Joe at [theatre] in [year]. Know for [most famous work].

My favorite is Meryl Streep's bio:

The World Only Spins Forward is a work of people, of art, and of history. It's a fabulous read and a must for anyone with even a small interest in Angels and/or theatre.