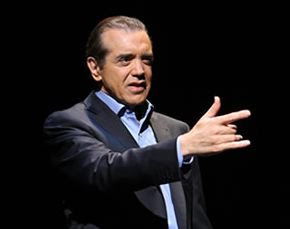 Chazz Palminteri wrote and first performed this semi-autobiographical monologue about twenty years ago. His story, of growing up under the guidance of the friendly neighborhood Mob boss, has since lost some of its novelty thanks to many years of The Sopranos in our consciousness. But Palminteri himself has gained something (besides, of course, fame in the movies) in the meantime: he's a more confident actor now, more able to put this story over intimately with what seems like effortless skill. His play is conversational and no-nonsense: except for the silent, slow motion recreation of a major event near the play's climax, it isn't fanciful. The pleasure of it is in Palminteri's relaxed, just-folks delivery and in his connectedness to the material (which gains an extra poignance now that Palminteri is older): he may be a movie star, but he turns everyone in the audience into someone who's just happened by that neighborhood stoop of his past.
Posted by Patrick Lee at 11:59 PM