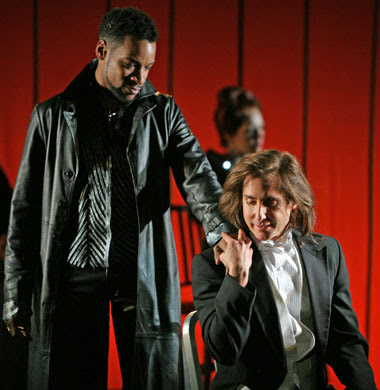 Photo/Brian Dilg
Edward the Second is another notch in the belt for Jesse Berger and his Red Bull Theater company. Christopher Marlowe's text, as adapted by Garland Wright, now takes play in an anachronistic time of gay night clubs and gramophones, a world that stresses the characters rather than the themes, and places no judgment on the page, but simply gives it flesh -- erotic, teasing, half-shadowed flesh. Edward II (Marc Vietor) all but abandons his country for the love of his friend Galveston (Kenajuan Bentley), and pays the price for such reckless behavior, as his court, led by Mortimer (a frightening Matthew Rauch), rises up and seize control. The set, from John Arnone, comes across as a modeling runway (only missteps there will lead to more than humiliation), and Clint Ramos's lush costumes keep the play poised at the height of fashion, both of which give Berger's bits of lightly shadowed nudity or blood and grime more contrast. In all, this is a very moving production, and one which doesn't (as befits fashion) show its age.