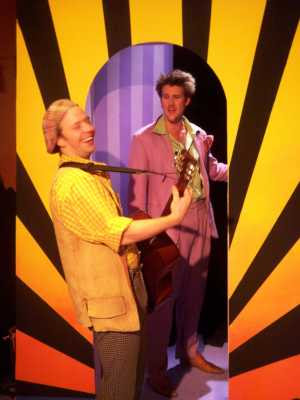 What you're looking at above is the almost unbearably bright production of Scapin currently running at the Turtle's Shell Theater, and at Jay Painter (with guitar), the man who is running off with the show. You'll laugh hysterically at the over-the-top antics to be found in this production, but it's hardly Moliere's Scapin anymore (though even he couldn't write all that much clever into this straightforward farce), it's Scapin! with an exclamation point. The problem the show faces is that Painter makes all the other actors look sluggish, so unless he's on stage (a tricky challenge, since he mainly plays pre-show and mid-show entertainment along with being a porter), Shawn Rozsa's direction seems pretty flat. There are some nice moments, particularly from John Freimann's pitiable Geronte (one of the two misers Scapin tricks out of their money -- for the sake of their sons!), but the glass of this scatterbrained production seems half-empty all too often.