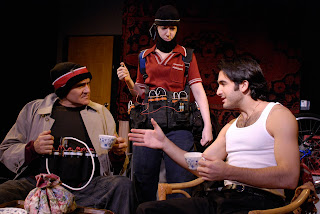 Despite the premise that has a Palestinian refugee and an Israeli expat forced to share the same small London one-bedroom, this new musical comedy plays less like a Middle East Odd Couple and more like broad satire. By the time the two men have a brief and short-lived roll in the hay, we get the show's allegorical lay of the land: their negotiations concerning the space in the apartment, marked by initial suspiciousness, moments of seeming reconciliation, esclating hostilities, and finally violence, are meant to stand in for the ongoing battles in the Middle East. It's remarkable how much the playwright (Oren Safdie, who also directed) is able to get away with thanks to the comic-strip veneer of his material: the aim for the funny bone lets him drain the anger out of scenes (such as the one where the two men degrade each other's religions) while still making his point. If the material is not consistently sharp (a musical number in which a couple of tv newscasters lust for more Middle East carnage to boost their careers is the show's low-point) and the lyrics do not always flow as easily as the show's music (which is Middle Eastern-spiced and performed by an onstage, 4 piece combo) the show is at its best disarming, thoughtful comedy with the right amount of sting in its laughter.
Posted by Patrick Lee at 10:20 PM