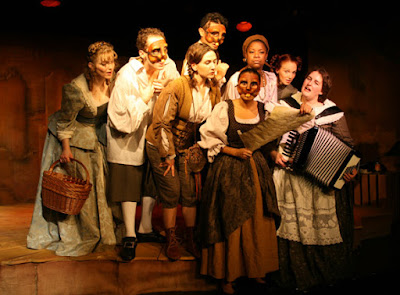 Photo/Kila Packett
For Flying Fig Theatre Company, which looks to produce theatrical stories about women's lives, it is perhaps inevitable that they at last do a show about beavers. (Sorry, couldn't resist.) Sadly, despite some clog-stomping numbers from the dames in question, and some fine physical work from De Beaver Twee (Arlene Chico-Lugo) and a narcoleptic pet, Knickerbocker (Nathaniel P. Claridad), New Amsterdames stumbles around, clunky in such big wooden shoes. Ellen K. Anderson's script is a skitterish bit of farce -- characters run around either trying to recover the lost deed to Manahatta, circa 1660, or to stop a modern-day flood -- but the split narrative between historical mock-ups like the timid Judith Bayard Stuyvesant (Michaela Goldhaber) or conniving Margaret Hardenbroeck (Jeannie Dalton) and the contemporary would-be meteorologist, Sweetie Chin (Tina Lee) doesn't work, especially when the worlds collide, thanks to the magic of the Great Beaver, Kitchi Amik (a rather bland Lucille Duncan). Heather Ondersma's direction keeps the show nimbly moving along (save for when five characters are on stage, in which case the blocking becomes as woodenly apparent as the stage) and Mark D. Spain's teeth-jutting masks give the beavers enough humanity to allow for the fact that they're talking, but Mrs. Anderson's script is littered with historical non sequiturs ("We're far from the village." "Ah, if you're African, you can't be buried in the town."), and these impromptu factoids slow the show way down.
Posted by Aaron Riccio at 8:22 PM

Aaron,
That's not the show I saw!! You sound bitter.
Fine physical work from ALL the beavers - especially Beaver Een (Ian Christiansen) and Kitch Amik (Lucille Duncan) in a very funny and strong performance. Bland?? You must be kidding!

Not to mention Margriet Hardenbroeck (Jeannie Dalton) - a very fine actress who turns in a spirited performance.

The show is a hoot - if you know anything about NY/Dutch history -altho it can be a bit hard to follow at times and the wooden shoes a bit distracting.
Hmm, frustrated actor, Aaron?

NG, thanks for the comments. I'm sticking by my opinions (and no, they're not birthed of frustration or bitterness), but I'm happy to hear that you got more from the show than I did. I would say, though, if you reread my post and reread your own, I think you'll find we very much saw the same show.