Some friends and I are working our way through past Tony Award shows, and it's been a surprising journey in many ways. This past week, we watched 1970 through 1974. The Tony gestalt has changed a lot over the years. (If you want to watch some shows yourself, here's a place to start; also, the Tony website is starting to put up some telecasts).


The most striking difference is that the telecast was not treated as an extended advertisement for then-current Broadway musicals. In fact, many nominees were not represented by scenes at all: Company, Follies, A Little Night Music, The Rothschilds, The Me Nobody Knows, Two Gentlement of Verona, Grease, Irene, and Shelter. Yes, some of them had already closed, but many were still running.

In contrast, Applause had numbers on not one, but two Tonys. And the scene from Coco in 1970 included an extensive dialogue scene (with some breathtakingly bad acting by Gale Dixon) and a fashion show and Katharine Hepburn giving her impressive all to singing/massacring "Always Mademoiselle" in a truly unparalleled performance.

In 1973, the show focused on Broadway musicals around the world, including Vienna: West Side Story; Tokyo: The King and I; Milan: Ciao, Rudy; Paris: Hello, Dolly!; London: Show Boat; Zagreb, Yugoslavia: Man of La Mancha; Witchita Falls, Texas: My Fair Lady. I would gladly have chosen a scene from A Little Night Music over any or all of these, but the woman in the French Hello Dolly was pretty darn wonderful, and hearing the teacher/director of the high school production of My Fair Lady say "The rain in Spain stays mainly in the plain" with a thick Texas accent was fun. 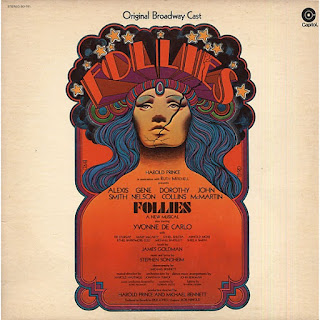 Another large difference between old Tonys and new is that the acceptance speeches were really short and low-key--frequently only a sentence or two. Sometimes people just said, "Thanks," or "Thank you." It was nice, actually.

Stephen Sondheim devoted his many wins to advocating for orchestration and musical direction awards, mentioning orchestrator Jonathan Tunick and conductor Harold Hastings as absolutely indispensable to the success of Company, Follies, and Night Music. Orchestrations became a category in 1997; Tunick won for Titanic. Conductor/musical director had been a category from 1948 to 1964.

First Larry Blyden, Alfred Drake, Helen Gallagher, Lisa Kirk, Hal Linden, and Constance Towers sang some of Rodgers' songs. (Helen Gallagher was on a few Tony Awards, and to me she represents a particular--and wonderful--type of old-time performer. She sold every word she said. She could--and probably did--make "Good morning" or "How are you?" thrilling.) The section ended with Rodgers at the piano. He said nothing. Nor did he smile.

Merman did her own songs, and she was wonderful. Her career was many decades old, yet her presence and her voice (that voice!) were undimmed. And getting to see her sing even part of "Everything's Coming Up Roses" was extraordinary. Her Gypsy remains high on my list of "if I had a time machine" performances.

One thing that the old Tonys shared with the new ones is some amazingly strong categories. Awards are ultimately weird. How can you judge an old-fashioned showy performance versus a subtler, more serious performance? A comedy versus a drama? Here are some of the awards for which I would have found it difficult to pick a winner. (Winners in bold)

Best Actress in a Musical 1971
Helen Gallagher (No, No Nanette)

Brock Peters (Lost in the Stars) 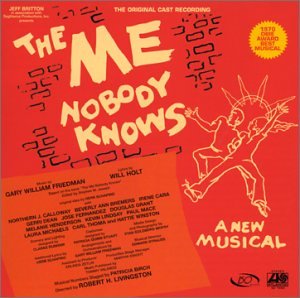 I could go on and on, but I'm going to stick with three final thoughts:

2. The telecasts were retroactively haunted by AIDS. The chorus boys in Applause: How many lived/how many died? Michael Bennett: what would he have accomplished? Ron Fields?

3. The musical number from The Me Nobody Knows was hard-hitting in its depiction of the results of racial prejudice--and it wasn't remotely out of date. Have we made progress in 45 years? Of course! Enough progress? Not even close...

Oh, wait, one more thing: having access to these telecasts--and to all the other amazing theatre-related videos on YouTube--is a form of riches, if you ask me.