As an indie theater supporter and huge fan of plays that stage science fiction, fantasy, and other genre work, I bought my ticket to Scapegoat Collective's Cloud as soon as I could.

Cloud imagines a world where technology--also named Cloud--can connect us to a new level of internet. Our individual consciousness becomes directly connected to the collective so we think and feel the same as everyone else who is connecting. Would the collective consciousness bring about world peace? Or would it strip the meaning out of the relationships that define us: friendship and love? 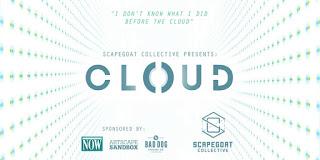 Cloud explores these hypotheses through three main groups of characters. The first group includes the first beta testers for Cloud: the creator Edward (Tim Fitzgerald Walker), his best friend Geoff (Jonas Widdifield), and Edward’s girlfriend Jessica (Khadijah Roberts-Abdullah). After Edward convinces them test the technology and save its funding, the experience does lead to one awkward night of sexual reconnection, but then splits the three individuals onto separate paths as they try to cope with reality after they’ve been in the collective.

Roberts-Abdullah was my favorite part of the play. I enjoyed the way her constant cursing and presence threatened and challenged the two men. And I was not the only one cheering when she finally chastised Walker for casting himself as the savior in this dystopian epic instead of the Dr. Frankenstein he really is.


The next group focuses specifically on the effect of collective consciousness on love. Tyler and Perry (G. Kyle Shields and Alexander Plouffe--and yes the name pairing is on purpose) meet at a party, fall in love, and embark on a long-distance relationship--just as Cloud offers them a way to stay in contact no matter the miles. I could feel the chemistry that grew between them, the affection that drives one to crazy things like starting a long distance relationship between North America and Australia. When they connected to the Cloud, their intimacy dissipated so quickly even I couldn’t remember why they meant that much to each other.

From the first words, I thought I would hate Human (Anand Rajaram) and his pointedly “meta” role speaking directly to the audience. Nothing he said about breaking the fourth wall surprised me, and yet I found myself laughing along. Perhaps interjections about the philosophy of connection and the relationship of audience to play are indeed called for in Cloud. It truly did build a bridge between the play’s ideas of the collective consciousness and the audience.

The lines created by Melissa Joakim’s lighting design were especially striking, especially as they interacted with network with square circuits taped onto the floor in Lindsay Dagger Junkin’s set design. The only distracting points were the lights in the set boxes. They didn't bother me at the time, but a friend pointed out that a high technology show could have had a smoother solution.

I will admit I have a unique perspective on Daniel Paggett’s Cloud, as I was there in the some of the same rooms as he wrote and workshopped its first (ish) draft in Storefront Theatre’s 2015-2016 Playwrights Unit. When I heard he was putting together a team to produce it fully, I knew I had to be there to see how it had grown and changed.

Watching it last week, I appreciated even more the detailed thought he has given to each aspect of the collective consciousness. Rajaram’s Human states so clearly what I assume he has fought over in his head so many times--and allowed Walker’s Edward to embody and perform. But I was also surprised to feel like so little had changed. After almost two years, the structure and characters had remained the same. I do wonder how much more it could have grown, how much more universal a depiction of the collective consciousness Cloud could have been if more voices had been included.

Even still, nothing would make me happier than to see more people flocking to Artscape Youngplace to see Cloud in its final week. We need more plays like this that force us to sit in a room and consider what it really means to be together as individuals, not through our phones or screens but by the live bodies, voices, and presence of others.

(Paid for full-price ticket, general admission. Front row in the center, by the column. Cloud runs at Artscape Youngplace through November 5th).
Posted by Maggie at 9:18 PM