Jesus Hopped the 'A' Train

What makes a person good or bad, and what's the dividing line between the two? Is religious devotion helpful or harmful in the search for redemption, and can it be both at the same time? How much bad can a good person have before tipping the balance, and vice versa? And is anyone even listening to the prisoners who wrestle with these questions while biding their time in the solitary confinement wing of a maximum security prison? Jesus Hopped the 'A' Train, Stephen Adly Guirgis's edgily compelling prison drama, can't answer any of these questions--seriously, now, what the hell can? Still, it does an engaging, unnerving job of trying. 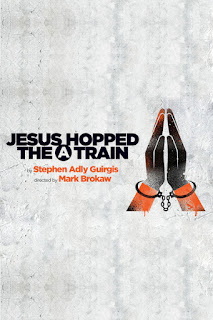 The revival of Jesus Hopped the 'A' Train now at Signature Theater has experienced its fair share of disruption: two of its five actors left the show unexpectedly, one for scheduling reasons during rehearsals and one early in previews for what is being described as a "medical issue." When I saw it, the production had only just started up again after a halt for some emergency rehearsals. No shock, I guess, that the cast seemed a little off at first, though the actors all found their groove well before intermission. Sean Carvajal, the newest member of the company, was still on script for a few of the later (and most intense) scenes; nevertheless, his Angel is already quite good, and I assume will only get better as he sinks into the role. This goes for the whole production, really: it's a credit to all involved that the revival is already as strong as it is, considering the circumstances.

The play, one of Guirgis's earlier works, can be clunky in parts. Some of the expositionary monologues feel a little forced, and some of the plot points that propel the moral haze driving the show feel a little too easy. I had trouble buying the motives of Angel's overzealous lawyer, Mary Jane Hanrahan (ably played by Stephanie DiMaggio). And Valdez, the unambiguously self-righteous sadist of a prison guard (a game Ricardo Chavira), is ultimately all bark and no bite--both as a sadist and, alas, as a character.

But at least for me, these quibbles didn't get in the way of the production, which builds to a mesmerizing, unsettling climax. This is due in large part to scenes carried by Angel and an ostensibly eviler prisoner named Lucius Jenkins (Edi Gathegi, in a genuinely riveting Off Broadway debut), who is awaiting extradition to--and execution in--Florida. Angel, arrested for shooting a Reverend Moon-type in the ass, finds himself up on murder charges once the cult leader dies on the operating table. Moved to protective custody after a vicious beatdown by other prisoners, Angel sees Lucius daily during their allotted hour of outdoor time in cages on the prison roof. Convinced that his actions were justified because the cult has his best friend in its grip, Angel is gradually challenged by the disarmingly likable Lucius, a recovering polysubstance addict and serial killer who has become born again. The many questions the play wrestles with--who deserves to be forgiven and why, what faith means and whether it helps, whether seeing the light (both literally and figuratively, a recurring theme in the play) truly matters--converge in the second act and alter the characters' lives in ways that never feel cliched.

Jesus Hopped the 'A' Train may be a flawed play, but it delivers. And the production--which, like its characters, seems to have taken some pretty hard punches along the way--is well worth your time and consideration. Kudos to the company for turning a bad situation good.
Posted by Liz Wollman at 8:46 PM