After being stuck in bed with a cold, I could not wait to attend the next Extraspace production at my main mid-sized theater in Toronto, the Tarragon: Marine Life by Rosa Labordé.

Marine Life is a romantic comedy with a touch of magical realism that sticks an environmental activist in a love quadrangle--does she pick the planet, her brother, or her lover? Sylvia (Niccola Correia-Damude) is is literally caught by lawyer Rupert (Matthew Edison) in the first scene's meet cute--when his fishing line hooks into her neck instead of a fish's. As the two fall for each other, Sylvia's mentally unstable brother and one-man mariachi band John/Juan (Justin Rutledge) fights to maintain her full attention. 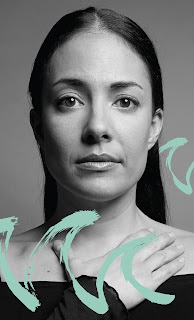 I knew this would be an environmental show from the moment I entered the Tarragon Extraspace. Opaque styrofoam lunch boxes were clumped around the stage and growing out of the audience, almost like clouds or growths of unnatural coral. And if that weren't enough, the projection screen stage and backdrop started with a projection of the globe at the top of the show.

Usually a show so obviously about a political issue would have my "preachy show" sirens blaring, but Marine Life depicted flooding, protests, the effects of human activity on the world's ecosystems, and even directly call out our role in global warming without preaching.


I am also usually dubious about projections--as I have seen very few shows that knew how to integrate them within the fabric of the story or its world--but in this case, I must credit Trevor Schwellnus's projection design with casting Marine Life out of realism and in a world where archetypes and the absurd could exist.

In the world of archetypes where each man stands for one type of society--unconventional, unstable and led by emotions with John/Juan versus conventional, stable, and led by society's external values with Rupert--is where Marine Life shined. When the lighting changed to denote a climate change joke or John/Juan sang his heart out in a parody "Mexican Love Song," it worked.

Whenever Marine Life strayed back into realism or I read it through that lens, it did not work for me. The romance between Sylvia and Rupert made sense in terms of the structure; she needed to fall for someone entirely opposite to her to start the conflict at the heart of the play. But when the first scene's courtship consisted almost entirely of Rupert asking Sylvia out, ignoring her polite and clear "not interested" until she gave in to his old-school, "gentleman" proposals, and then leapt four weeks later with her falling for him, I could not believe in their relationship or its power over her.

Taken as real people fighting to survive and fall in love in this scary new world, Marine Life was too neat and tidy to feel right. But if I instead experienced it as an absurd battle between archetypes and the ideas of what romance, activism, and family are supposed to be in a world where flooding in cities like Houston can happen at a moment's notice--then it worked.

Even without a cold-medicine induced-haze, Marine Life takes you just enough out of today's world to look back and laugh or rail at it. It is theatre that does much and has much to say. It was well-worth the trip to the Tarragon.

Two complimentary tickets, general admission that I received from the theatre in exchange for volunteer work. Sat in the back row, stage left.
Posted by Maggie at 5:00 PM