Shame of Thrones: The Rock Musical: An Unauthorized Parody

Good news: Shame of Thrones: The Rock Musical: An Unauthorized Parody (what would be the point of an authorized parody?) largely succeeds in getting laughs--some big laughs--lampooning the oh-so-lampoonable TV hit Game of Thrones. 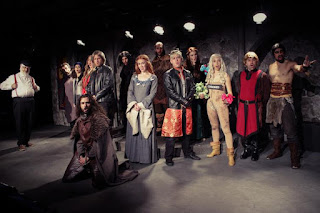 Bad news: it's often difficult to impossible to hear what's going on. Only some performers have the voices to be heard unmiked; of the others, only a few performers are miked; the prerecorded music frequently drowns out the singers; and many of the cast could use lessons in enunciation.

In other words, get out of your own way, Shame of Thrones! Why take all that time to write good jokes and funny lyrics if we often can't hear them? (The music is by Erin Stegeman and Peter Frintrup; book and lyrics by Steven Christopher Parker and Steven Brandon; additional lyrics by Erin Stegeman.) I understand that budget is probably an issue. However, it would help a lot if the prerecorded music was piped from the back of the stage instead from four speakers in the auditorium, where it drowns out much of what goes on on stage.