Among the many ways Rodgers and Hammerstein helped innovate the American stage musical was through depth of character. Their musicals, after all, featured some particularly memorable ones, many of them women, with nuanced inner lives that they expressed to audiences through increasingly sophisticated song, dance, and dialogue. The anxious Laurie manipulated her suitors and then had psychosexual nightmares about them in the form of a lengthy, absorbing, and downright creepy ballet. Nellie Forbush casually tossed off some lame excuses about her own racism, but then struggled to overcome it so that she could live happily ever after with Emile DeBecque. Maria, a terrible nun with no direction in her life, slowly realized her potential as a governess, music educator, mom, and Nazi-evader once she ended up getting saddled with a bunch of neglected, unruly kids. 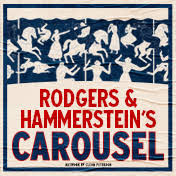 But depth of character somehow evades poor Julie Jordan, which is a problem because her paramour, Billy Bigelow, is a hot mess who also just happens to be endlessly fascinating: smarter, deeper, and more philosophical than he seems at the outset, with a restless mean streak and oceans of bitter agita beneath his easy charm. Bigelow is fire and brimstone; Jordan is merely a "queer one" (not remotely in the contemporary sense of the word), at least as she's described by her way better-developed and more interesting friend, Carrie Pipperidge. I've long struggled with Carousel in this particular respect, because the imbalance disrupts a show that might otherwise be perfect: dazzling to look at, ravishing to listen to, so far ahead of its time in particular ways, so extraordinarily weird as a piece.

The dark midcentury musical adaptation of an even darker early-20th-century play (Liliom by Ferenc Molnar), Carousel touches on themes that certainly weren't considered musical theater-fodder at the time, and that still come off as reasonably edgy today: "Hey, Oscar! How about we adapt that Hungarian flop into a musical about America's cruel and random class system, maybe with a side-serving of spiritual nihilism?" "I like what I'm hearing, Richard. But can there be a botched robbery that becomes a messy suicide and some domestic abuse? Also--stay with me--a clambake? If so, you got yourself a deal!"

Contemporary concerns about Bigelow's tendency to beat up on the womenfolk in Carousel are, I think, ultimately misplaced: men continue to abuse women, and women continue to remain with men who do, and Carousel never condones the behavior despite a few dated lines of dialogue about the situation. But, then, the structure of the piece makes fixation on the abuse especially easy in especially persistent ways. Billy's magnetism and depth become tacit excuses for his horrible behaviors, his beautifully appealing rough side, his slap-dash, totally unfounded redemption despite absolutely no personal growth. If Rodgers and Hammerstein had bothered to make Julie remotely as three-dimensional as they'd made Billy, I'm convinced the show would resonate more deeply and remain ahead of its time in ways that it never really can as it is. And while Hilton Als' piece about this production sheds some interesting light on Julie, his interpretation seems nevertheless a little forced in very tired ways: "she's a post-adolescent creature longing to have the experiences of a woman"? Great, but then, so was Liat--and so, still, are countless doe-eyed, dewy female characters who get dopey and dazzled the instant they spot some swaggering hottie. I hope you'll forgive me for being a little frustrated, at this point, with depictions not of women but of their longings as devised by men, and for wishing that there was just a little more to them than blushing flirtatiousness and pheremones.

The current revival, starring Jessie Mueller and Joshua Henry, along with Lindsay Mendez and Renee Fleming, is lovely to look at and to listen to. I do agree with Als that Henry and Mueller's coupling is at once electric and no big deal. I was waiting for the show to make some dumb, forced commentary about the fact that its Julie is white and its Billy is black, but there is none, and that's good because there doesn't need to be--certainly not now, but perhaps not then, either: marginalized people scrabbling in desperation in this country don't raise eyebrows among the hoity-toity for more than a passing moment if at all, so long as they remain tidily out of sight and in the margins. And it's made pretty clear from the outset for an affluent audience that Billy and Julie never have a snowflake's chance in hell of anything approaching upward mobility.

Pleased as I was by just about everything in this production--its fine casting; its songs, sung by supple, able voices; its choreography, by Justin Peck, which so frequently emulates waves lapping against Maine's wild, craggy shores--I remain disappointed that no matter how well-played she is, the passive, silent Julie just can't hold a candle to the brooding, restlessly self-destructive Billy. Mueller does her best--and her best, of course, is outstanding. But ultimately, Carousel is a musical about a restless man who marries, dies, and gets redeemed, rather than it is about a couple negotiating the unfair circumstances of crushing poverty. If the show reeks of sexism, it's due not to Billy's fists but to structural imbalances. Don't get me wrong: this production is gorgeous, and Carousel has countless strengths as a paradigm-shifting stage musical. I just can't help but wish that its creators, having assembled most of the enormous, complicated puzzle with such patience, care and insight, had thought to insert the final--and now forever missing--piece.