I have identified the problem with the musical Chess. It's bad.

You've got Florence, who loves bad boy chess player Freddie and has probably been his lover in the past. Does the show do anything--and I mean anything--to show their connection or give us one reason why anyone would like Freddie? No. 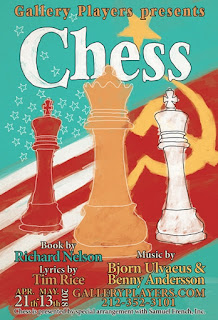 Florence then falls in love with Freddie's opponent Anatoly.* Does the show do anything to show their growing connection? Nope. (At least Anatoly isn't as thoroughly obnoxious as Freddie, so it's a little easier to buy Florence's love for him.)

Who is Florence anyway? We know she escaped Hungary 30 years older and that her father taught her to love chess. That's something, anyway, though her character is otherwise a pretty generic example of "women who love too much."

And what about the constant tension between the two chess players, given that they represent countries that hate each other? If you already know the history, there is indeed some tension, but the show does little to earn it. 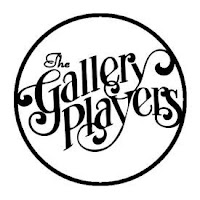 In its defense, the show has a handful of beautiful songs, in particular "Someone Else's Story" and "I Know Him So Well." Other numbers have the potential to be exciting if presented well. In fact, the entire show can be lifted by a really good production, with performers filling in the blanks left by the writing.

The problems start with the first scene, Budapest, Hungary, 1956. Bullets are flying, people are panicking, havoc reigns. In the midst of this, Florence's father sings to her of chess. Except that, in this production, the sound effects of the weaponry are so loud that the entire scene is unintelligible. Maybe, and this is generous, 1% of the words could be heard.

Then we move to 1988 and the great chess match between Freddie and Anatoly. Freddie is supposed to be charming and obnoxious. He succeeds in the second. Anatoly comes off a little better, but definitely not charismatic enough for Florence to love on sight. Florence does a little better at establishing a character, but not much. (I've seen this actress before and know that she can be downright amazing. Not here.)

I'm not naming the actors because I'm not sure how much of their performances is their fault. Mark Harborth's direction is the three-dimensional manifestation of full of sound and fury, signifying nothing. Rather than building a foundation for the lousy show to stand on, he slathers on noise and movement, hoping that energy will cover up the weak structure underneath. It doesn't.

I remain a fan of the Gallery Players, and I'm grateful this wasn't the first show I saw there. I might never have known what a polished, classy outfit they can be.

*This name was misspelled in the original version of this review.
Posted by Wendy Caster at 9:01 PM

I can't take this seriously when you don't spell the leading male character's name correctly.

Thank you for your helpful suggestion. I made the change.