A Gentleman's Guide to Love and Murder 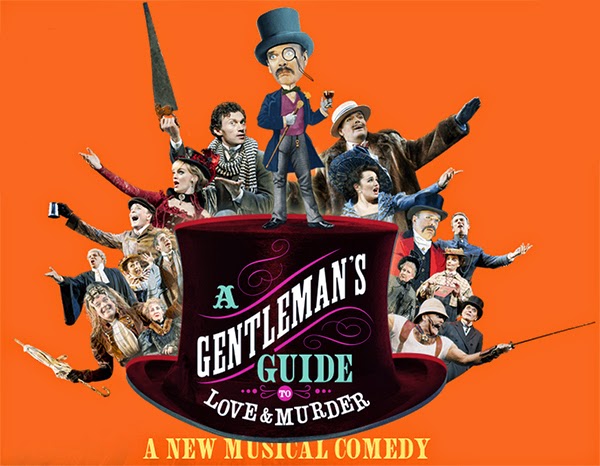 When it opened in November, A Gentleman's Guide to Love and Murder got some of the best reviews of the season. Which is especially nice because it is a small, old-fashioned musical with no shit blowing other shit up, and no big names associated with it (unless you count Hugh Jackman's wife, who is one of the producers). It is not based on a well-known film, television show or book, and its original score is not even remotely based in contemporary pop song (it pays propers to Gilbert and Sullivan).

I say "especially nice" not because I am particularly partial to small shows in which no shit gets blown up by other shit, but because we are repeatedly being told that there is no longer room on Broadway for small, solid, non-branded, original shows that seem to come out of nowhere. So every time one opens--to raves, no less!--I can't help but cheer for the little guy.

That being said, this little guy has struggled pretty hard since it opened and got raved about in the press. Gentleman's Guide flew under the radar for months, (usually) grossing just enough to stay open. Apparently, through much of the run, there was no small amount of anxiety among performers who couldn't help but notice that they were playing to an awful lot of half-empty houses.

This has all changed in recent weeks. When the Tony nominations came out in April, Gentleman's Guide had been chugging along so quietly and so modestly for so long that there was real surprise about the fact that it got the most nods (ten) of any musical to open all year. Less surprising was the almost immediate box office bump: not 24 hours after the nominations were announced, tickets for the musical, previously abundant on all the discount sites, were suddenly hot and hard to come by. Within a week, Gentleman's Guide was reporting its highest grosses, ever. I know this because I'd assumed I'd just waltz in to see it a week or so before the Tony broadcast this Sunday. Oops.

I did see the show, albeit at a much higher price than I'd assumed I'd pay. I enjoyed myself very much. It's hard not to--the cast is strong and the direction creative, there is terrific chemistry between the actors, and the score is witty and hummable. No one involved takes anything about the show too seriously, either, which is good, because the preposterous plot is basically an excuse for a lot of slapstick, mayhem, and madcap shenanigans. Also, wackiness and balderdash.

The plot: After his mother dies, Monty Navarro (Bryce Pinkham, who I loved as Henry Clay in Bloody Bloody Andrew Jackson and was happy to see in a leading role) learns that she was a member of the wealthy D'Ysquith family, which disowned her when she fell in love with and married a Sicilian. Financially strapped and about to lose his lady love, Sibella (played with grace and a particularly awesome touch of batshit crazy by Lisa O'Hare), to a wealthier man, Monty also discovers that he is ninth in line to become Earl of Highsmith. Can he beat the odds and win Sibella's heart by bumping off all the people in line before him and becoming Earl without raising any suspicions?

Yeah, well, of course he can. What we get, then, is scene after scene of Monty coming up with inventive new ways to kill off the competition, all the while courting his beloved Sibella and simultaneously wooing his distant cousin, Phoebe D'Ysquith (Lauren Worsham, appealingly confused). Watching the bodies pile up is endlessly diverting, especially since every member of the D'Ysquith clan is played by Jefferson Mays.

Mays was wonderful in I Am My Own Wife, and is just as wonderful here, in multiple roles and what seems like hundreds of fast costume changes. He also happens to be one of the spittiest actors I've ever seen, which is worked directly into the show in later scenes. The cast works incredibly hard, sweating (and spitting) buckets, but I loved how loose they were with the material and with one another. No one takes this musical too seriously, which is why it's so much fun--and why it is able to get away with the kind of corny, broad, everyone's-a-target humor that might otherwise offend.

I'm glad Gentleman's Guide is getting so much attention after struggling along for such a long time, though I admit I'm a little worried that all the accolades it's getting might, ironically, hasten its demise. I can already feel the backlash starting: word of mouth when it was struggling along was that it was a terrific lot of fun; word of mouth now seems to be that it's cute but not worth all the fuss.

I'd argue that it is certainly worth the fuss. It's not Gentleman's Guide's fault that it is the sturdiest, most engaging musical to open all year, or that it doesn't have mechanical gimmicks or an international brand associated with its name. It may not be the deepest or most groundbreaking show ever staged, but it's inventive, entertaining, and original. No matter how long it lasts and how many awards it ends up getting, I'm glad that there's still room for shows like it on Broadway,