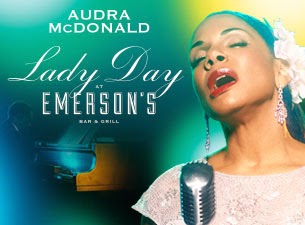 When one monstrously talented person impersonates another monstrously talented person, the desire to resort to cliches doubles in intensity. And since seeing Audra McDonald in Lady Day at Emerson's Bar and Grill on Tuesday evening, I admit I've been struggling with ways to talk about the show that don't resort to trite blathering about how incredible and heartbreaking Holiday was, or how incredible and heartbreaking McDonald's portrayal of her is.

But believe me when I tell you that every single blathery, trite, cliched superlative I can come up with applies here. At least when it comes to McDonald's performance, which is brilliant, sublime, superb, extraordinary.

The show itself is not quite as superlative, but I don't think that matters, at least not in this case. There have been other productions that I can't speak to: Lady Day at Emerson's Bar and Grill premiered in Atlanta in 1986 and opened Off Broadway at the Vineyard in the same year (S. Epatha Merkerson, later of Law & Order fame, took over for Lonette McKee as Holiday during that year-long run). It has been bouncing around the country in regional productions ever since. I can understand why--Lady Day is small and easily staged, and it allows for black, female actresses to take on a challenging, interesting character.

After all, Billie Holiday is, in the end, just the leading character of this show--a fictionalized one based closely on the real woman. What we see of Holiday in Lady Day is playwright Lanie Robertson's reimagining of a concert she gave to seven audience members at a rundown bar in South Philadelphia in March 1959. A few months later, Holiday would die at 44 of cirrhosis of the liver and heart disease, both the result of excessive drinking and heroin use. It has been pointed out by other critics that at this point in her life, Holiday probably would have been completely unintelligible, totally ravaged, impossible to listen to. It has also been pointed out that the real Holiday was a famously private performer who suffered recurring bouts of stage fright, and that she certainly wouldn't have chatted amicably and at great length between songs as she does here.


But I had different concerns prior to seeing Lady Day. I bristle at depictions of famous dead women as broken, fragile flowers whose rough lives caused them to die victims. We tend, as a culture, to historicize men like Jim Morrison, Jimi Hendrix, and Charlie Parker in very different ways than we do women like Marilyn Monroe, Janis Joplin, and, yeah, Billie Holiday. I was worried, then, that Lady Day would perpetuate the persona of Holiday--so easy to imitate, if not to imitate well--as Poor, Sweet Victim. In truth, sometimes, the play itself does just what I was afraid it would. But McDonald, known primarily for her gorgeous voice, is also a very fine actor, and her Holiday--while as pickled and junked-up as the real one surely was this late in her life--is more balanced than she might have been at the hands of a lesser artist.

McDonald's Holiday is so uncannily good that I had to actively remind myself that I was watching a person playing a role. I also had to remind myself, on a few occasions, to breathe while watching her, which might sound like a line, but I promise you is not. Her Holiday is blunt about the many miseries we know she suffered: crushing poverty, abandonment, violence, debasement, racism, addiction. But she is also strongly opinionated, delightfully crude, intelligent, snarky, and, all things considered, surprisingly big-hearted.

The play, then, is not the thing here. It's the performance (I should say "performances," because the trio backing McDonald is tight as can be). Even so, Lady Day sometimes misses the mark. Some of the transitions between monologue and song feel forced. A lengthy monologue about the blunt racism Holiday experienced in a restaurant in the deep south during a tour with Artie Shaw, by equal measures hilarious and horrifying, serves as insufficient preparation for the agony of "Strange Fruit." A few of the other leadups seem similarly artificial.

Nevertheless, McDonald is so compelling and convincing that the last leg of the show, which depicts Holiday's abrupt downward slide, is almost too much to bear. Drunk from the moment she appears onstage, Holiday drinks copiously throughout the show, only to "take a break" near the end, despite her bandmembers' protestations. When she returns to the stage--with her dog, Pepe, and one of her arm-length gloves ominously rolled down to her wrist--she is less agitated, but so far gone that she slurs what she can remember of the rest of her numbers beyond recognition. Watching someone actively feed their addictions is uncomfortable at best, and here, it's excruciating: we have grown to love and appreciate this character, we all know where she's going, and McDonald is so deeply into the role that she doesn't bother prettifying anything about it. Minutes before the final curtain, Holiday mumbles about how she really only ever wanted a beautiful house, some kids, and a comfortable space to make music with her friends. While this proclamation might seem hollow and forced--and probably is on the page--McDonald delivers it like a sharp kick to the face.

While occasionally veering toward the mawkish in its depiction of a sick, declining jazz icon, then, Lady Day at Emerson's Bar and Grill is still one of the most satisfying shows I've seen all season because of what McDonald does with it. A lesser artist wouldn't be able to dignify Holiday, but McDonald clearly respects and loves her enough to breathe new life into the cultural memory about her. If you're hoping to see McDonald be clean and pretty and sing beautifully, this is not the show for you--wait for her next concert at Lincoln Center or Carnegie Hall. But if you want to see one of the finest living performers do some of her best work to date, don't miss this one if you can help it.
Posted by Liz Wollman at 2:25 PM

I think this was my favorite show of the year!

So glad they decided to do a live recording of this show, it deserved to be memorialized!!! http://nikiwhite.dreamwidth.org/