About halfway through Lazarus, the self-important mess that is currently a hot ticket at New York Theatre Workshop, the dude next to me started noodling with his Apple watch. Now, normally, that sort thing fills me with sanctimonious rage: how DARE this troglodytic asshole distract me with his shiny electronic bauble? FUCK this guy with his bad theatergoing manners! But in this case, not only didn't I mind, I was momentarily mesmerized. It's a pretty cool gadget, really, and it was a lot more interesting than much of what was going on up on the stage pretty much each time he checked it (which was about every three minutes). What all is on there, aside from the time, I found myself wondering? And what is time, anyway? Does time exist anymore? Because, man, it sure would be reassuring to know that eventually, I'll be allowed out of this theater and will get to go home, which is not as beautifully designed, but also not nearly as boring. 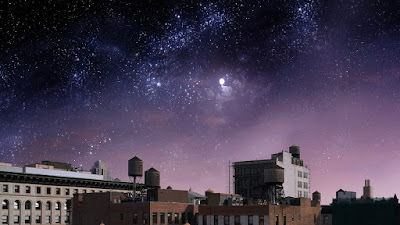 Lazarus was probably too good to be true, really. Any project developed by the brilliant, highly accomplished musician David Bowie and the brilliant, highly accomplished director Ivo Van Hove would have held almost too much promise of exponential brilliance. Both specialize in detached, cooly efficient surfaces, beneath which roil blood, guts, and the contradictory tangle of the human psyche, poked through with lacerating barbs of moody alienation. Bowie's songs may be gorgeously produced, chock full of tight, chugging rhythms and the slickly smooth harmonies of female backup singers, but take a listen to his lyrics. Whether he's intoning them in his husky baritone or rising past his thinning tenor into primal scream territory, his songs inevitably imply that he's been up for weeks doing blow, losing touch with reality, making terrible, life-mangling mistakes, or just staring into the void, probably while doubting your love or worrying about fascism. Likewise, Van Hove's overlying vision might be sparsely efficient and outfitted with clean lines, beige tones, and cold lights, but his characters are about to beat or fuck the shit out of one another, maybe both, probably while being judged by the magnified faces on subtly shifting video projections.


But, alas, Lazarus plays like it was assembled by email, and like maybe the entire creative team--Van Hove, Bowie, the playwright Enda Walsh and Van Hove's scenic and lighting designer Jan Versweyveld--only really got down and dirty during tech, when they all moved into the theater and threw a bunch of ideas together in a big, annoyed hurry before rushing off to deal with their many other projects. Maybe not. Maybe they worked for weeks, confidently deflecting questions by the cast about what their character motivations were supposed to be and what Alan Cumming was doing in some of the later video projections (he seemed as confused as the audience was, really, when he showed up).

Anyway, whatever the hell happened during the leadup to Lazarus, the result is a long, frustrating and almost completely humorless two hours, during which underdrawn characters don't really connect with one another or translate to the audience. Instead, they stumble numbly through a forced semblance of nonplot, pausing occasionally to bust out (very well) with Bowie songs that really do sound great (nice work, band. I'd have paid to listen to you guys jam for two hours, anyway). Most of them do a fine job of going through the motions, and I have a friend who insists that I should never, ever pity a working actor, but I had my moments in this case.

Based on or a sequel to (maybe both?) the 1963 Walter Tevis novel The Man Who Fell to Earth and its 1976 film adaptation by Nicolas Roeg (the latter of which starred Bowie as the humanoid alien Thomas Newton), Lazarus finds Newton, here played by the consistently fine, impressively committed Michael C. Hall, living in a generic condominium in New York City, where he spends his days lying around (he is doing so, quite artfully, when we walk in to the theater), eating cereal and twinkies, and drinking ample glass after ample glass of gin. He was once a Powerful Man who has Deep Regrets (cue "The Man Who Sold the World"), but now he's trapped in a Sisyphean nightmare: he can't leave Earth and he can't die, so he's drunk and isolated and miserable and older than he looks.

Apparently, this does not stop women of all ages and backgrounds from thinking about him and caring about him and flinging themselves at or at least near him all the time. He has a personal assistant, Elly (played by an incredibly game if perpetually dazed-looking Cristin Milioti), who is a lost soul stuck in a loveless marriage. She finds herself being inexplicably and fully transformed in Newton's presence (so--wait for it--she turns to face the strange changes.). Said changes involve blue hair, hallucinations, the loss of sanity and, of course, increasingly revealing clothing, some of which she seems to fetishize. There are three other women--helpfully called Teenage Girl 1, Teenage Girl 2 and Teenage Girl 3--who are maybe dead, or spies, or aliens, or figments of Newton's imagination or all of those things. Whoever they are, don't worry--like Elly, they are totally obsessed with this soggy, gloomy, drunk middle-aged man. There is another Girl (Sophia Ann Caruso) who is also maybe an alien or a hallucination or dead or Newton's daughter, but when she's not trying to figure out what her name and past are, she worries about Newton more than anyone else.

In case the previous paragraph isn't clear enough on this front, Lazarus makes most sense as an extended male fantasy, and not a terribly enlightened one. Though now that I think about it, gender issues are sort of mentioned in passing when one dude sings "All the Young Dudes" late in the show, I guess in acknowledgement of the fact that he is one.

Anyway, where was I? Yes, ok, there's another guy named Valentine (Michael Esper) who dresses in black, is weird and bad, and wanders through the action--such as it is--with a menacing air and a knife that he uses to stab said Young Dude (again, artfully). There are a lot of abrupt noises and video images, some strobe lights, a small avalanche of rolling black balloons, a character who bleeds milk, and blah blah blah cool stage effects I just didn't care.

I've heard from a few people I like and trust, who felt the same about Lazarus--a fellow scholar friend found it both artistically and politically offensive, which I rather admire, in part because I just couldn't generate that much energy when I sat through it. This all being said, plenty of people clearly disagree with me on this--reviews of Lazarus are middling to good, and my Twitter feed seems filled with huge fans who are just breathless about the production, which they call things like shattering and sublime. So what the hell do I know? If you have a ticket to see Lazarus, I hope very much that you enjoy yourself more than the Apple watch dude and I did when we saw it. Me? I'll skip a second viewing and hang at home instead, making up for the two hours of my life that I lost on Wednesday night by listening to Bowie records and dreaming of some future Van Hove/Bowie collaboration that isn't "a saddening bore."
Posted by Liz Wollman at 6:35 PM