On Your Feet! The Story of Emilio and Gloria Estefan

When it comes to biographical jukebox musicals that are produced by the same people being depicted, you could do worse than On Your Feet! The Story of Emilio and Gloria Estefan. The musical may be an extended advertisement for the Estefan empire, but hell, the couple seems to have lived lives that were destined to be made into a big, dancy, feel-good Broadway show, so I can't begrudge them the sanitized recounting of their rags-to-riches story. 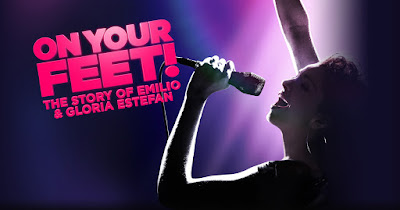 It's a pretty good story, at least as it's presented here: the daughter of an aspiring singer and a Vietnam veteran, both Cuban immigrants, Gloria (ably portrayed by Alexandria Suarez as a child and Ana Villafane as an adult) is a college student in Miami in the late 1970s when she first sings with a local group called the Miami Latin Boys, managed by Emilio. Emilio (played with enormous charisma, if a highly questionable relationship with tonal accuracy by Josh Segarra) is quick to recognize Gloria's monstrous talent--and her sex appeal--so changes his group's name to the Miami Sound Machine once she officially signs on as a member.


As the band strives to become known--first on the local dance circuit, then in the national Latin market and finally in the mainstream--Emilio and Gloria work like dogs and fall in love. They also begin a lengthy feud with Gloria's mother (Andrea Burns), who doesn't approve of (and, given her own failed music aspirations, resents) her daughter's path, which keeps her away from her MS-stricken father and her increasingly wild little sister. But with regular encouragement by her abuela (Alma Cuervo, just right) and the enduring love of her man (and producer!), Gloria becomes a superstar with the efficiency of a well-oiled [Miami Sound] machine.

The trajectory is played with an appropriate amount of well-paced enthusiasm, just the right amount of tension, and plenty of recognizable pop tunes: Will the band hit it big on the local level with "I Need Your Love" and "Conga" if they play enough bar mitzvahs and weddings? YES! Will they make it even bigger when "Conga" and "1-2-3" cross over into the mainstream market? You bet your ass! Will Emilio and Gloria sustain one another with their "Everlasting Love", even when they tire of being on the road all the time? Of course! Will they "Turn the Beat Around" when the rhythm...um...comes to get them? You know it!

They will also survive a horrible bus crash, which is only a spoiler alert if you have never heard of the Estefans or googled Gloria even once. They will, in fact, come back even stronger--and more in love!--than ever, this time with the support of Gloria's mom, who realizes after said crash that she "Don't Wanna Lose You."

You get the idea. This isn't Shakespeare, after all, but sometimes one prefers a bag of chips to a multi-course meal at Per Se. And while I'd quibble a little that the bus crash might have helped build momentum earlier in the show, or that some of the pacing of the show is a little slow, or that the guy playing Emilio should probably have not been given a solo number, On Your Feet! is fun, engaging, and exactly what "Dr. Beat" ordered. Go, have fun, and don't be shocked by the fact that at the end of the show, you will be asked--politely but with enthusiasm--to "Get On Your Feet."
Posted by Liz Wollman at 12:00 PM