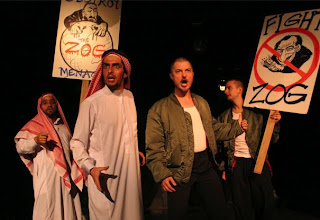 A Gilbert & Sullivan-soundalike topsy-turvy set during the current War On Terror and peopled with Nazi skinheads, al Queda terrorists, a war-happy President, a limp-wristed Jesus, and so on, The Beastly Bombing combines the nose-thumbing, shock for shock's sake spirit of punk rock with the sounds of sophisticated light operetta. While the sounds are sensational (Roger Neill's pastiche score is a delight from start to finish; I especially loved The President's "Major General"-like patter song: knowing little, caring less, that's the secret of this leader's success) and the musical numbers are enlivened by smart staging and terrificly funny choreorgraphy, the show's perverse politically incorrect pleasures wear thin quickly when it's clear that they're all the show has to offer. By the second act, when we are desperate for something more unifying in the material than its surly attitude and its conceit, the show instead goes even more madcap. The Beastly Bombing is a brat that hasn't grown up into a real smart-ass.
Posted by Patrick Lee at 11:50 PM