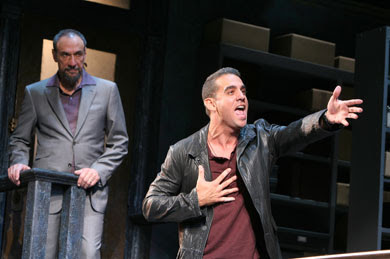 Photo/Joan Marcus
Stamp collectors (or should I say philatelists) know this better than anyone: errors are what keep things interesting. Theresa Rebeck is an overt writer, very explicit and crisp in tone and mannerisms, so she explains this within the play itself: damaged people are interesting too. So are interesting hybrids of character types: F. Murray Abraham plays an arms-dealing stamp enthusiast named Sterling, and Alison Pill plays both a scrap and scrapper of a girl as Jackie, who is best described as the flickering exhaust of a lighter: dangerous and fragile all at once. This is important, as Rebeck's plot is fairly obvious and in the familiar con-game tenor of early Mamet: her characters are what sustain the script, her actors are what fill the stage (John Lee Beatty's sets are intentionally bland so as to support the squalor of Jackie's life). I'm glad, then, to have Doug Hughes (Doubt) in command, who eschews spectacle for essence, and as a result often gets it. As for the rest of the cast, Bobby Cannavale understands both the aggression and the silence of a smooth talker, and Katie Finneran (who was a riot in Pig Farm) inverts her deadpan to make one of the most numbingly unconscious villains I've seen on stage. (As for Dylan Baker, both the actor and the character are superfluous: Baker's sleepwalking through a boring role.) Doesn't matter, really: I couldn't keep my eyes off Pill, who has a special tenacity of spirit that is as irresistable here as it was in Blackbird and Lieutenant of Inishmore. She'll grow up to give my favorite actress, Mary Louise Parker, a run for her money, mark my words.
Posted by Aaron Riccio at 11:56 PM