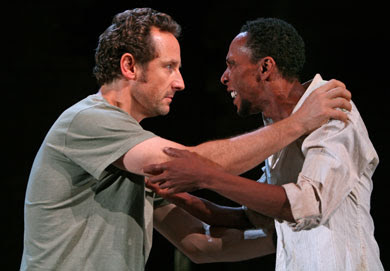 Photo/Joan Marcus
J. T. Rogers hasn't just written an excellent dramatic and political play about the swift, mass genocide in Rwanda, 1994, he's managed to match the calm-of-the-storm tone up to what he describe as Rwanda's "vertiginous dichotomy." By purposefully double casting Boris McGiver and Owiso Odera in opposing roles, the similarities between Hutu and Tutsi are even more emphatic, and the politics are even more facile. (McGiver plays a snooty French diplomat and a snubbed South African NGO worker, Odera represents both the impassive Rwandan police and the helpless UN major there to "maintain order"). Other actors are simply strong at coloring their parts: James Rebhorn is an excellent embassy official, as convincingly aloof and pension-oriented as he is genuinely disconcerted and frustrated later on, and Charles Parnell makes for an awfully charismatic government spokesperson . . . until his specific politics are made quite clear. Beyond the politics, there's also equal care and thought given to the personalities of the American family caught in the middle of this all, and their plight is what transforms the show from mouthpiece to actual drama. All these layers might sound confusing, but Rogers has an elegant, naturally ebullient way of telling the story, as easily eliding from one scene to the next as he switches from language to language. It's a subtle and smooth immersion, and unlike Hotel Rwanda, it does the whole thing without establishing any heroes. The only spot that troubled me was Max Stafford-Clark's direction, which seemed to keep overemphasizing scenes and themes (is a pile of skulls really necessary?) that had already been more efficiently thrust into the periphery.