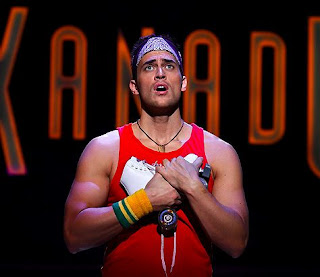 I spent ninety minutes at Xanadu with a big goofy smile on my face; I'd be surprised if anything opens on Broadway this season that can match it for silly gleeful fun and campy laughs. I'm no fan of the movie on which the stage show is based - a loopy fantasy in which a muse springs from a chalk drawing to inspire our hero to open a roller disco, it may well be the most inept and insipid movie musical I have ever seen - and I haven't given dance-rock band ELO (who wrote the movie's songs) a second thought since high school. But the stage musical, which is less an adaptation of the screenplay and more a happy, party-vibed satire of it, is ridiculously entertaining: Douglas Carter Beane's book plays like the comic strip spoofs of movies you'd find in Mad magazine circa its salad days: smart, punchy, and sarcastic. I had seen an early preview of the show back in May, before Cheyenne Jackson took over the male lead and before the show opened to raves, and I'm happy to say that I enjoyed it even more this second time. Jackson has the deer-in-headlights dreamboat schtick down pat and is well-matched to leading lady Kerry Butler, whose contagiously fun, winning performance makes the hard job of comedy (on roller skates, no less) look effortless. Tony Roberts has comfortably settled into his straight-man duties, while Jackie Hoffman and Mary Testa continue to clown around the proceedings likes deliciously seasoned vaudevillians. And Curtis Holbrook still delights doing that tap dance atop a desk. I don't know which pleased me more: watching his hot hoofing, or watching the lit-up faces of the two dozen on-stage audience members watching him do it.
Posted by Patrick Lee at 12:59 AM