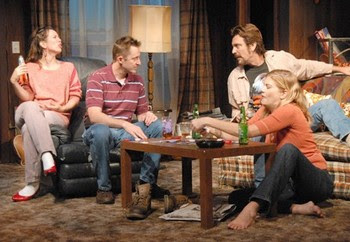 Scarcity is a thuggish play, with loose scenes shuffled over by the violence (implied or not) of a raised fist. There are moments of great strength in Lucy Thurber's script, as when the perpetually drunk patriarch, Herb (the excellent Michael T. Weiss), asks if he's ever hurt his daughter, or whenever his struggling but strong wife, Martha (the fiery Kristen Johnston), tries to keep up the lie. Their relationship is believably intense, and we can see how such a routine would affect its two children, Rachel and Billy. I'll be the meanie though, and say that this is where the play falls apart: the young actress playing Rachel (Meredith Brandt) is awful, and although Jackson Gay can have her pace around the kitchen, implying that it's a prison and that her father really has molested her, her lengthy scenes don't seem precociously chilling, they seem planned. Billy (Brandon Espinoza) is more believable, wound so tightly that he can finally look at his father without flinching. While his romantic entanglement with his teacher (Maggie Kiley) is also bold and explosive, there's little explanation for why she, who seems to have suffered so little, desires the sort of life on display in Scarcity. The show comes across as essentially true, but exaggeratedly so, particularly with the final subplot, which always looks like it's being played for easy (albeit uncomfortable) laughs. Martha survives by mentally prostituting herself to her cousin, Louie (Todd Weeks); in exchange for the food and bills her husband can't provide, she leads love-struck Louie on, letting him think he's a part of the family, though it's obvious everyone (including his own wife, Gloria) despises him. That's a play in of itself, but as with so much in Scarcity, it's lost in the violence.
[Also blogged by: Patrick | David]
Posted by Aaron Riccio at 11:35 PM