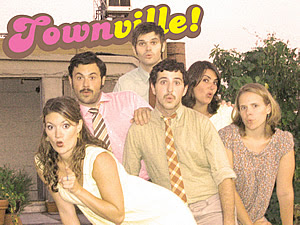 I've been told that if you don't have anything nice to say, you shouldn't say anything at all. But because I like Collaborationtown so much (The Catharsis of Pathos and, to a degree, 6969), I want to clear the air about their horrible new play (with music!), Townville! That hokeyness, with the swing-open cardboard sets, the bright color-coordinated wardrobe, the high-pitched voices, and the smiles, that's all intentional. All the actors involved, in case you can't tell, are capable of real emotion, like Boo Killebrew. But the show is so busy satirizing something -- I guess it's to do with the slow slip of America into totalitarianism? -- that there's no truth for the actors to latch onto, just jokes, very very bad, cheap jokes. The direction, by Matthew Hopkins and Ryan Purcell, is at least consistent, and sustains the image of a sparkling yet sinister commune, where everyone is happy, or else. But the plot, pieced together by the company, just jumps from point to point, recycling the same character jokes (how many times must we watch Geoffrey Decas belittle TJ Witham?) in an effort to hold out long enough to make meaning appear. Hint: when your show within a show is avant-garde, and the show itself has musical numbers, yet is not a musical, reason is not likely to come riding in on a white horse.
Posted by Aaron Riccio at 8:02 PM

1. this review not make much sense. at all.
2. why don't you spend time trashing some commercial show that could care less. the indie theatre scene does not need little wanna be brantley/isherwood jerks.

i mean - you were right - you didn't have anything "nice" (or even constructive)to say.... so what does writing that serve you? as a theatre artist with a company (a few years older than Collaboration Town) i must say i am quite tired of the Village Voice and all these snarky blogs and their belief that they can stand on a pedestal and harshly judge people working and creating in the downtown scene and write nasty reviews without any sense of journalistic talent or integrity.

To be fair, this is (1) not a review, it's a blog about the show, (2) written as part of the contest we're running on the site, the point of which is (3) to encourage us, and hopefully others by example, to go out and see more theater, and not JUST the commercial shows. I have a separate site on which I review shows, and that's why I did not post there.

I'd hardly call this a pedestal that I'm writing from, but I'm glad you're writing: I'm always happy to dialogue with other theatergoers or artists. One thing: I'm not harshly judging the people WORKING on the show (I made a point to laud Collaborationtown itself); I'm being harsh on the show, which could do so much better. Were I given, say, a script with which to review, and a full-time salaried job as a critic, I would certainly look to be constructive.