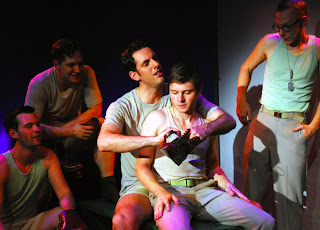 I fell in love with the musical Yank! at NYMF two years ago and ever since it's been high on my Deserves Another Production wishlist. Now it's back (at Gallery Players) with some judicious changes in a production that is even more effective and moving than the one I saw in 2005. The story, of the gay romance between two enlisted men during WW2, could not have been told in popular culture at the time it is set, and a good deal of the show's poignancy and power comes from telling it now in the style of old-fashioned music theatre. (There's even a second-act dream ballet, improved in this production and expressively danced by Jonathan Day). The score (by David and Joseph Zellnik) is dazzling: it has the feeling of the music of the era but it never sounds second-hand. (I especially loved the barbershop quartet-style harmonies for the men in the barracks, and the song that is essentially Yank!'s love theme, "Remembering You", has the kind of haunting melody that you can't get out of your head for days.) The show's book is also accomplished and impressive: it convincingly renders the dynamics between the lovers while also depicting the pervasiveness of homophobia and honoring the gravity of war that is the story's backdrop. This production, resourcefully and fluidly directed by Igor Goldin (who also directed the NYMF incarnation), also boasts excellent leading players: Bobby Steggert (a scene-stealer in the Roundabout's recent revival of 110 In The Shade) is a knockout, anchoring the show with an emotionally forceful performance, Maxime de Toledo brings just the right balance of swoonworthy charm and aloofness to his portrayal, Jeffry Denman (not only reprising his role from the NYMF production but also doing a bang-up job with the choreographic duties here) and Nancy Anderson (as every female in the show, and doing some dead-on superb vocalizing as the gals who are heard singing on the radio) are perfection.
Posted by Patrick Lee at 12:00 AM