A Glance at New York 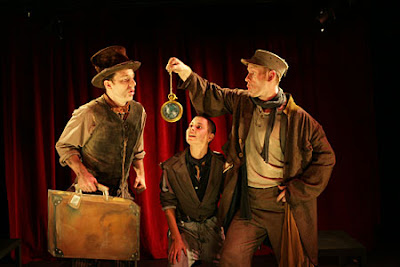 Photo/Dixie Sheridan
I'd certainly be woozy and out of breath if I had to get up on stage and perform under the tight, hyperactive confines of Benjamin Baker's 1848 hit, A Glance at New York. There's no way I'd be able to play two characters -- sometimes at once -- as Randy Sharp demands of her cast. I'd be more lost than George Parsells (Ian Tooley), the country rube who keeps getting swindled in the city, or confused by the local, colorful slang. However, to be fair, most of the cast seemed to be tripping over their lines, or half-heartedly moving together, and both the visual pictures and text seemed clumsy. Reviving the vaudeville comedy does indeed give us a glimpse of New York, a place so much chaotic and faster-paced than it is today that it's almost a foreign country. It lets us hear the old, sorrowful tunes of that era (as sung by Britt Genelin and Laurie Kilmartin): so what if the songs, like the cuts in scene, come out of the blue? The show explodes onto the stage, and ebbs away just as quickly 50 minutes later, and such oceanic theater isn't concerned with narrative so much as a theatrical flood of ideas and images. To its end, A Glance at New York succeeds in that, but without any sort of anchor, the production is a bit of a wash.

Hey - I'm pretty sure Randy Sharp is a woman...

Anonymous, you are correct, and it has been fixed in the post. Hard to tell sometimes when you're working off a name in a program that could swing either way (and having Google'd the name, it looks like a problem others have had in the past before).